Meet Your Neighbors: The Wolfrums

Continuing our series of interviews with our Southern Gables neighbors, to help us get to know and appreciate each other.  Ed and Carolyn Wolfrum have been raising their family in a place of friendly cooperation and community spirit… if your guess is Southern Gables you might be right. Let’s see. Interviewed by Bruce McDonald.

Bruce: Carolyn, I heard your name from our friends Justina and Glenn. They said they had met you on their walks around the neighborhood, and that you were so friendly and interesting. Will you introduce us to the rest of your family?

Carolyn: Yes, my husband is Ed and we have two girls, Anne and Grace.

How long have you lived in Southern Gables?  We have lived here since November of 2002. That’s a lifetime for both of our girls, so they are Southern Gables “true native” residents.

What are a few things that you like the most about the Southern Gables community?  We love the beauty of everyone’s yards, how friendly people are.  It has been a great place to raise our daughters. 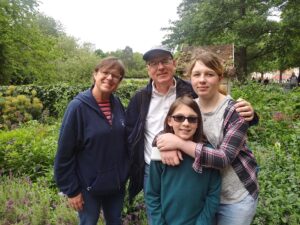 Do you have a favorite memory with your Southern Gables neighbors?  We used to love the End of School Year festival at Green Gables.

What is the most neighborly experience you’ve had or seen in our neighborhood?  Our neighbor across the street shares our wheelbarrow.  We now share the wheelbarrow with quite a few neighbors.  It’s a great connection!

What are your hobbies?  Your work?  Ed is a Researcher/Manager at the National Renewable Energy Lab and I am an Itinerant Teacher of the Deaf for Jeffco Schools. We love working in our garden, running, bike riding, reading and traveling.

What is your favorite quote or saying?  Be the change you want to see in the world. — Gandhi

Is there anything else you want us to know about you?  Our daughters go to school at Carmody Middle and Lakewood High School.  Anne is 16 and Grace is 13.

We introduced Justina Walls and her husband Glenn McCarthy a few weeks ago in our “Meet Your Neighbor” series,1 and noted that they are inveterate walkers, rain or shine. With so much time spent outside in Southern Gables, greeting and talking with neighbors, it’s not surprising that they’ve had lots of interactions with the inhabitants who speak in Woof, Meow, Hoot, and other exotic languages. Justina tells us about some of the couple’s encounters.

Glenn and I have had many animal adventures on our walks and met more neighbors through many of them. We found a black Scottie and returned it to its home numerous times. We bought a dog leash as a result, as that Scottie was heavy to carry back to its home and was a wiggly fellow! 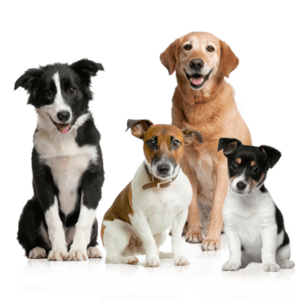 Once when walking alone, two very large, friendly, energetic black dogs crossed my path at various parts of my walk. On my return home, they appeared again, seemingly from nowhere! They were reluctant to be coaxed into following me into the garage where I was able to “capture” them and call the telephone number on their tags. It was a Vet’s office but there was no answer. Then I called Lakewood Animal Control who happened to be searching for them. Through a series of efforts, they were happily reunited with their people. All this occurred in the garage as they were so large and strong, if the door to the yard or the house had been opened, they would have charged past me.

I had a recurring instance where a couple sat on the front porch with an older black dog who ran at me, growling and baring his teeth threateningly while the people shouted “he won’t bite” but did nothing. Thankfully, shielding myself behind a parked car helped me stay safe until he lost interest! That’s been the only scary animal adventure, thankfully. And yes, I started looking up the street a bit to see if the people and their dog were on the porch before turning into that street. There’s always another street to walk!

We’re both “dog moochers” as we pet the friendly dogs when both the dogs and their people let us know that it’s ok. Going home to our own kitties with dog smells on us was not a popular thing in all the years that we had kitties.

Glenn counts the rabbits in the seasons where we see them. For those who may not realize, they proliferated when the coyotes moved in, chasing out the red foxes. Red foxes can pivot quickly and easily, thus catching rabbits. Coyotes can’t do that unless the rabbit is old, injured, or too young to know better. Our wildlife guy explained that these things (like the weather) are cyclical.

We also watch for various birds and enjoy seeing the “regulars” as well as periodic unusual birds in our neighborhood. We enjoy the annual duck couple that comes to our street and sometimes our yard. We were surprised one dusky evening when a large owl swooped by. 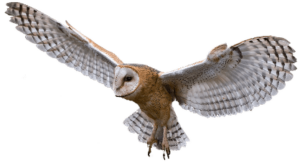 It was so close that the air flow from its wings tousled my hair, yet it was eerily silent. If geese or ducks are in the street, we shoo them out of the way. When driving, we stop and do the same thing to protect them. Other motorists often shout “thanks!” and give us thumbs up at those times. It’s wonderful to see that so many people care about the wildlife! 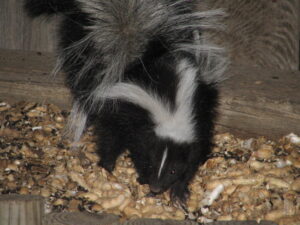 Our backyard has provided us with many years of wildlife adventures. When we first moved in, every evening we had red foxes, raccoons, and a periodic skunk mama with her babies. 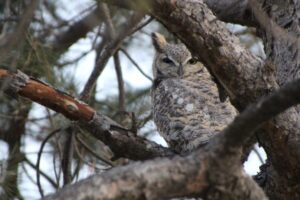 They all brought their babies in the evening, and in the daytime, the red foxes and kits would loll about in the back yard. We would watch them for hours. Of course, we have squirrels and many birds. Glenn now records and counts birds for a couple of different bird groups. We see more additional types of birds in recent years than we did originally. 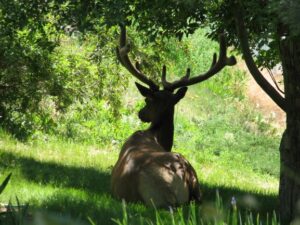 Perhaps the most unusual adventure was one very hot summer day when we noticed an elk in our neighbor’s back yard! He was standing under a shade tree, enjoying the breezes. After calls to our neighbor and several animal agencies, we learned that the elk had blocked morning traffic at Garrison/Estes and Morrison Road. They assured us that he’d find his way back out, and to not try to “herd” him or pet him. While we are both “city kids” we are not “dumb city kids” (at least not that dumb!) and laughed at the very idea of herding an elk! We enjoyed him from the window and the back deck. And yes, by that night, he had found his way out and we hope he returned to his habitat safely.

We hope that everyone enjoys this wonderful area and slows down enough to see and appreciate nature all around us. We are so fortunate to live in an enchanting area of the world!

Justina Walls holds a BS in Criminal Justice from The University of Texas at Arlington and a JD from The University of Denver. Her early career was in Criminal Justice and she later moved to Housing and Urban Development (HUD) where she held various positions in Equal Opportunity, Native American Programs and Single and Multifamily Housing including management. She has held a license as a Spiritual Practitioner since 1994 and Certificates in Plant Based Nutrition from eCornell University and Forks Over Knives Plant Based Cooking from The Rouxbe School of Cooking. She has taught healthy plant-based cooking and nutrition for over 30 years. She lives and travels with her husband Glenn McCarthy.