The Rock of Southern Gables

Our Name Is Set in Stone

Our Southern Gables entrance sign (“The Rock”) at Jewell and Estes is on a small corner lot with landscaping maintained by neighborhood volunteers. During the growing season we have a signup list for watering and weeding. Neighbors take a one-week turn, and water two of those days unless the rain gives them a break. Irrigation water for the ornamental plants comes from a hose connected to the Martinez residence next door, and the Southern Gables Neighborhood Association reimburses the owner for the water. 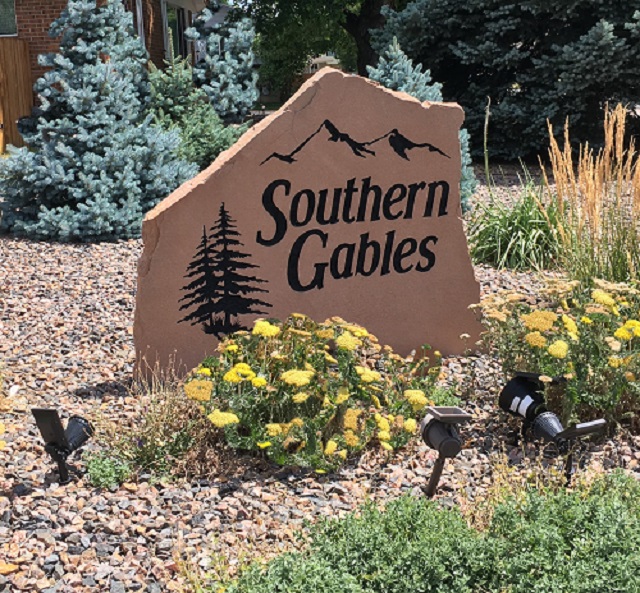 Frank Bontrager heads up the effort needed for ongoing maintenance. He and some good neighborhood volunteers keep the landscaping in good shape, the weeds out, and the night light shining on the big stone slab. To provide a little background, Frank tells us, the 1,100 pound flagstone was installed in 2013. This sign project was the culmination of a two-year project funded by residents through the Neighborhood Association, and accomplished with the volunteer efforts of neighbors working together. Landscaping was completed with a weed barrier, granite rock and a number of perennials, shrubs, and three small blue spruce trees.

The project began with a lengthy series of negotiations by former SGNA president Stanton La Breche with the Ag Ditch Co., which owns the site. Dealing with the bureaucracy of a big company was an exercise in patience; in the end we actually had to pay for, and insure our interest in, reclaiming and improving their weed-choked, neglected lot. We had to pay the City for the cost of a curb cut on Jewell Avenue to give Ag Ditch maintenance equipment access to the east side of the ditch, since their trucks used to go through where our sign is now. On the bright side, one of our neighbors from a landscaping company provided a design at no cost for the project.

We wrote a few years ago about getting the weeds cleared 2 from the adjacent lot on the east, and down the length of the ditch (The Southern Gables Riviera). That kind of project is by nature a recurring one, even though the requirements are not as exacting as you require on your lawn. We’re still after our friends at Ag Ditch to come out and take another whack at the weeds along the ditch. We’re pretty sure that they won’t wait another 50 years; we were happy they cleared it once, and we’re even happier that we don’t have to do the weeding all along the ditch ourselves. It’s enough to pick a weed or two, once in a while, when we water the plants around our sign.

If you’d care to volunteer to take a turn watering, as of this writing we have some weeks open in August or September. You can sign up here. The project naturally lends itself to social distancing, fresh outdoor air, and a little healthy sunshine.