A few years ago we hosted a celebration of the 50-year anniversary of the Southern Gables neighborhood, honoring the “first owners” and long-time residents. This story was among the memories shared on that occasion.

Time capsule: writing in May 2017…  Look across South Wadsworth Boulevard at the new housing going in over there. You’ll get a sense of what it was like in Southern Gables during the summer of 1967 when our brand new ranch-style Vicksburg model house was being built on South Yarrow. A complete neighborhood is being created over there at the old Green Gables County Club grounds in one fell swoop, not unlike what happened here long, long ago.

1967. Married less than a year, we had signed a contract with Wood Brothers earlier in the year and had put a deposit on our lot. Our choices of models had been limited as WB had determined which model would go on which lot as they resisted putting the same style house next to each other, and we wanted an eastern exposure midblock. 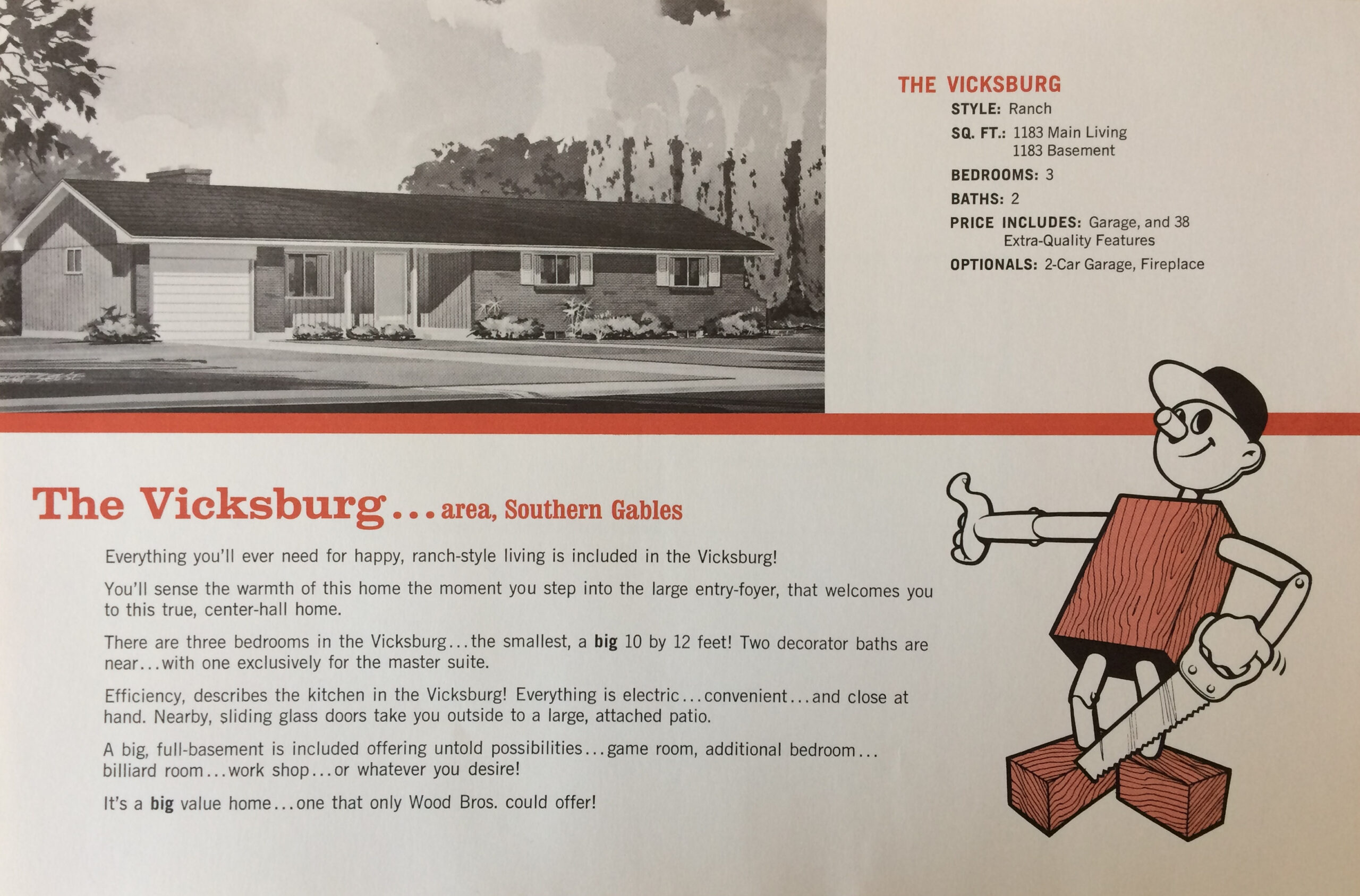 “Woody” showing off the Vicksburg model in the Wood Brothers brochure

The decisions we had to make were daunting for a newly married couple. First of all there was the cost. They wanted $18,400 for a plain Jane, stripped down model. (I know, outrageous!!!) If we wanted brick all around rather than just across the front it was another $400. fortunately grandma came through with the money and we built our home with brick rather than straw or sticks.

Then there were the decisions about the house on, well, everything. What kind of counter top, gas or electrical stove, color choices for the walls and carpet, and so on. We were even permitted to authorize change orders to modify the house itself; for instance you could order the dishwasher relocated, a wall moved, or even the porch enlarged. Of course today’s newly built homes save you the trouble – or the choices – of deciding much.

Once the house was ours – ours and the mortgage company – windows had to get coverings, furniture had to be found from family and friends, and when that wasn’t enough, Sears. We spent like sailors on shore leave, and entered a long period of great debt.

Wood Brothers built the homes a block at a time with crews moving from model to model. One week you’d see basements being dug and poured, a couple weeks later model after model would be framed giving you your first preview of your neighbor’s homes, and eventually the finishing touches inside and out added. Then at last you’d have the final walk-through inspection of your very own home and, if all went well, you’d be presented with the keys.

It was impossible to keep your stunningly expensive, new home clean! Dirt filled the air and construction noise rang constant. There was not a single tree worthy of the name, grass only slowly arrived, and the winds blew incessantly; you had the makings of housekeeping madness. And it only got worse when the rains came.

On the upside in Southern Gables friendships that have lasted decades were formed. Kids grew up together, went to school together, played sports together, until they moved on in their own lives as adults with a core value system built by our neighborhood. Some have moved back with their kids so they too can capture the magic we experienced.