This week we feature a story about an earlier time, good people, and a gentle deception, by our neighbor Ken Fischer. To see more of his stories, click on his name at the end of the article.

His name was Francis Hoffman. Francis Frederick Hoffman I believe.

It was 1957 and the midpoint of the Ozzie and Harriet years. Times were good. The suburbs were still blooming with GI Bill money. Although the Russians worried us with Sputnik and we feared they might bomb us, we did duck-under-the-desk drills in school so we could be safe if they did.

Summer was looming. Another year of sticky hot deadly humid Iowa sunbaking except, to my surprise, Mr. Hoffman contacted my dad about tuck pointing his small brick house. My bricklayer dad was not really interested in such a small job and opened the gate for me. I had learned the basics of applying “mud” (mortar) with pointing trowel and striker to loose or missing bed joints between wall bricks. Also the more technical mortar “buttering” of suspicious brick along windows. In addition, my brother and I learned enough to be dangerous around brick veneering and in future years built walls, fireplaces, barbeque pits and some ornamental endeavors we will not discuss.

The Hoffman job would take a solid week for which I would be paid fifty dollars — minimum laborer’s wage. It went pretty well as I was athletic and worked from a ladder with minimal difficulty save keeping my mortar wet. I found it slightly odd that it was my dad paying me. Because he was my dad and knew I shouldn’t have all that money at one time, he paid the job off at ten dollars on the first of each of the following 5 weeks. I later found out Mr. Hoffman paid nothing and Bob Fischer covered the job. He was doing a favor for a neighbor, as well as paying for me to hone a skill.

Mr. Hoffman was a Bob Cratchit-like little man who spoke in the mumbling phrases of Mr. Magoo. He was a businessman of some sort. Left in the morning in a floppy suit. Returned at night, but was seldom seen outside the house. Mrs. Hoffman was never seen and it was understood that she was an invalid.

Their adult son, Francis, was known in the neighborhood as “Franney.” He would occasionally walk from the back door to the one-car garage and do some type of bench work. We never saw him elsewhere, and he never spoke. This peculiarity fostered neighborhood talk, and the kids’ perception that Franney was weird, odd, strange, peculiar and scary. He wore military garb, usually khaki pants and a sleeveless olive drab tank top. It was rumored that he had been in the war and came home “different.” Neighborhood women who sat together with iced tea on a front porch two doors down had a ripe gossip source in Franney. As usual they would add two and two, get five, then add four and get eleven. Several of the ladies changed the subject as this Salem-style inquisition began. As a youngster of ten, neither I nor my fellow adventurers much cared. However, just in case and just to be safe, we never traversed the Hoffman yard. The speculation about Franney made for respect or fear of what might loom in that garage. At one point, my dad afforded me a clue regarding this neighborhood rumor. I made some mention of Franney peering long and deep from the darkness of the garage toward the baseball game in the street. Pop’s comment — normal and brief, totally Fischer: “You think you’re pretty savvy. What you don’t know would fill a lot of books.”

What I did not know until years later was that Francis Hoffman was a pretty solid halfback at Senior High in the thirties. He was popular in school, a leader. He entered the Marines just after Pearl Harbor. He served his Marine Corps time in the Pacific and was a survivor of Iwo Jima — the most hallowed battle in Corps history. Those few who knew the real story, knew that Francis never really came home. He was termed to have “battle fatigue” and was not comfortable around people. Most of the men in the neighborhood were combat-seasoned in the first or second war, but spoke not at all, or very minimally, about their service. Most, however, seemed to put it behind them. Franney couldn’t.

Francis and his family were hardcore German as were we Fischers, the Vollenweiders next door and the Schmidts across the street. We were equaled by the very Irish Watsons, and the McCauleys in the same block. Having an early developed steel trap mind, I noted that the German parents were quietly supportive when it came to Francis’ singularity, probably because of his German ethnicity. The Irish were also supportive, but (I would learn) for different reasons.

The Nativity Church, one block away, was under the purview of Father Shekleton. He was more Irish than his name sounded, and his diverse flock brought the German and Irish communities together seamlessly. At Christmas, the church featured Santa Claus for the little ones. For one Saturday afternoon and evening, one of the stout parishioner uncles or granddads would don red and white to visit with the excited little people. When the prevailing Santa’s knees went south, a new Santa was needed. Father Shekleton was guarded about the new Santa and gave his holy assurance that the man was of high character and very interested in this one-day job. Parishioners assumed that the newly recruited Santa was from another parish, to prevent an identification crisis as had unfortunately happened with “Uncle Bill” once before. 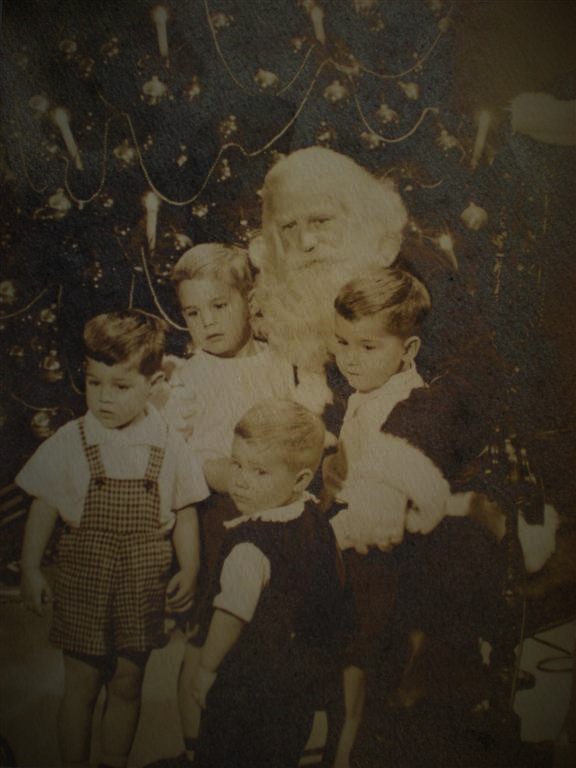 The new Santa arrived in character and never left it. He spoke slowly and softly and with a calm, but deep and knowing voice. He would explain in detail the workings of the North Pole, the elf function and how he could cover the territory so efficiently. The children would linger in front of the big chair and listen to this first person history from a well-padded man, who sold it exceptionally well. Several of the parish mothers dressed as Santa’s helpers and provided small packets of jelly beans (the reindeer loved these treats) for the urchins to share on Christmas eve. Miraculously, each packet had the child’s name written on it in olde English script. How did they do that? Mrs. Watson (the artist), backed up by Grandma Vollenweider and Mrs. Schmidt. The child’s name would be mentioned and Peg Watson went to work. After the last child was “interviewed,” Santa would swing a large black bag (not dissimilar to a Navy sea bag) over his shoulder. His helpers would shake sleigh bells. He would gather all the letters regarding all the anticipated presents and make a dramatic exit through the back door of the church hall.

This door led to Nevada Street which Santa crossed in full costume, then walked through the high bushes disappearing across the vacant lot to the rear door of the Hoffman house.

The secret was secure for many years as that is how Franney wanted it. However, by way of Christmas cheer, a Dubuque Ham would arrive by messenger at the Hoffman house at about the same time each Christmas season. The trusted Germans of the neighborhood suspected the wily Irish, but it was not openly discussed.

In later years Francis Hoffman was good company for his mother, who was actually bedridden. In addition, he performed a variety of anonymous acts of kindness like shoveling snow (always covered completely to avoid detection) for the elderly. He was given leads on summer and winter service needs by his pal, Father Shekleton. Should some recipient of his work recognize him, they were strongly advised to keep it in the family. He came and went via vacant lot. Francis wanted no publicity or notoriety.

I thought of “To Kill a Mockingbird” and “Scout.” Francis was the “Boo Radley” of the neighborhood. A good and quiet man, who chose his own way in the world. He gave back far more than he took from life.

2 thoughts on “A Christmas Story”