Continuing our series of interviews with our Southern Gables neighbors, to help us get to know and appreciate each other.  Justina and Glenn are a familiar sight in the neighborhood: walking, walking… Interviewed by Bruce McDonald.

Bruce: Let’s start with the Colorado native question.  We know Southern Gables has become home to people from all over the world. Were you born here, or if not, what brought you to Colorado?  Justina:  I grew up in Fort Worth, attended the University of Texas at Arlington, then worked in law enforcement. I came to visit a friend here and absolutely fell in love with Colorado! I immediately felt a sense of belonging to the land, the place. I transferred here with the US Bureau of Prisons, then moved to HUD and also went to DU Law School while working at HUD.

Glenn: I was born in Brooklyn and moved around a lot: a farm in Pennsylvania, New York City, and Long Island. In 8th grade I was introduced to cross-country and track and became an avid runner. I was offered a track scholarship to Fresno State where I went to college, and then later taught in San Diego. While there I joined the Peace Corps and served in Venezuela. After that I moved to Northern California and worked in IT for Hewlett-Packard. I wanted to go to Colorado for the running since it was kind of a Mecca for that, so I accepted a position in Colorado. Over time, I’ve worked for various companies in this area in IT. That was what got me here. I immediately got into the running scene, and coached. My coaching experience was long enough that I’ve had the experience of coaching children of my first athletes, as adults. 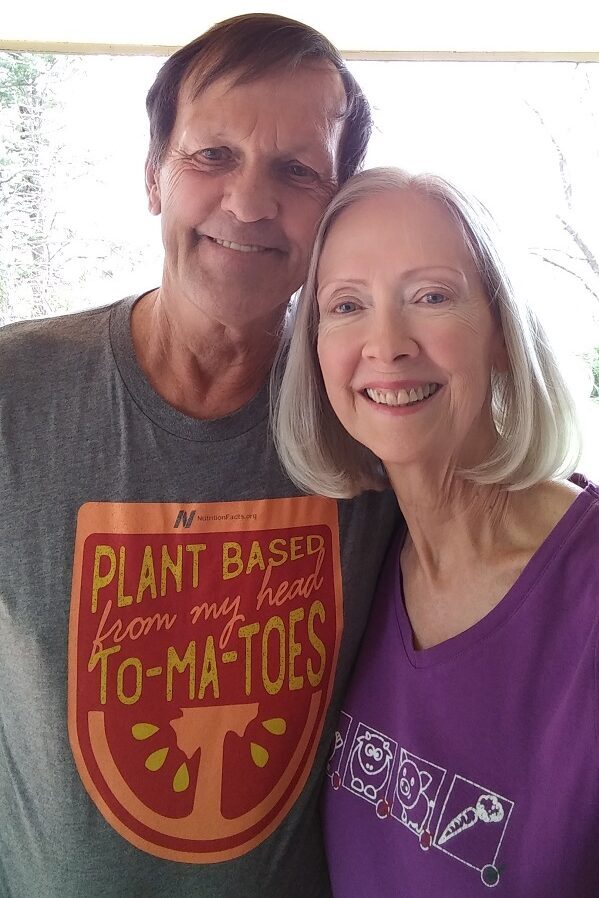 Two good stories about being drawn to Colorado! How long have you lived here in Southern Gables?  Justina: We moved to Southern Gables in July 2002, a year after we married. We had lived on the southeast side of Denver before moving here, although I had been coming to Lakewood to attend Mile Hi Church for many years and it’s nearby. When we found this neighborhood we loved how quiet it is, the convenient location, the varied house designs, the views and the general feel. Over time, we’ve learned that the people are the best reason of all for living in this neighborhood! It’s home. What makes home home is the community, the people.

Do you have a favorite memory you can tell us about, with your Southern Gables neighbors?  Justina: Years ago when we were both still working, I was walking by myself one day and had a dizzy spell. I sat down on the curb rather than risk falling. After a bit, a neighbor named Ilse came outside and checked on me, and ended up driving me home. That was the first time that we’d met, and it’s a great example of the kindness we’ve experienced in this neighborhood.

Glenn, what would you say is the most neighborly experience you’ve had or seen in our neighborhood?  So many people have been kind to us in the years we’ve lived here. I certainly do appreciate the “unknown angel” that clears sidewalks of several houses of snow lately! Our  immediate neighbors have all been kind and helpful to us  through the years. Justina: We know one gentleman down the street that has helped his older neighbors for many years, shoveling, starting their cars, getting them things they needed. There are many instances of good and kind people doing nice things for each other in this neighborhood.

How about hobbies and special interests?  Glenn: That’s an easy one. We are both, as we describe it, “food and nutrition nerds.” We have both been completely plant-based vegans for many years, Justina since 1990 and I joined her in that choice in 1999. Justina: Glenn was already part-way, being a vegetarian when we met. It didn’t take long for him to join me in vegan pursuits. Originally, I did all the cooking. Over time, we shared cooking, and now, Glenn does most of it. We have a vegan cookbook collection of over 600 books (plus many other books). When friends kid us about so many cookbooks, I laugh and say them, “Hey, you could have worse addictions!”  I think that a person either understands the joy of reading cookbooks, or thinks that makes no sense! Glenn: Both of us have taught cooking and healthy nutrition classes for years in various venues. Most have been in the Denver-Boulder metro area, but we’ve even taught in Mexico! We love to both cook and deliver food to friends over time when those friends were ill or in the hospital, or just as a thank you. Justina: It takes effort, and we’re always taking classes to learn and  grow, to stay on top of the latest nutrition and health research.

Glenn: Food isn’t the only thing in our lives, though. We both love libraries and have been so grateful for the Jefferson County and Denver libraries and their “parking lot delivery” systems during this last year. Justina: Museums, too. We are members of the Denver Art Museum, the Nature and Science Museum and the Denver Botanic Gardens. We both love the mountains and Rocky Mountain National Park in particular. Our travel has traditionally included at least one beach trip a year to various beaches and countries. It also has included many other locales, and we are looking forward to traveling again when it is safer.

Bruce: Hey you didn’t mention walking! Glenn: Sure, we’ve loved walking for years, and the neighborhood is so great for that. I was a serious distance runner and coach for many years until my knees no longer cooperated. I still take it as a coaching challenge, timing our walks and keeping track of the distances to help us improve. Justina: I like to say that “he walks me,” since we don’t have a dog. No leash though, haha! In addition to walking because we love it, it’s also helped us learn more about the neighborhood and meet neighbors.

Bruce: It’s been great learning some new things about you. Can you leave us with a favorite quote or saying?  Justina: One favorite is “Change your thinking, change your life” from Ernest Holmes. We have learned firsthand how very true that is.

In closing, here are some additional things I learned about Glenn and Justina. When Glenn was in the Peace Corps in Venezuela he was introduced to Arthur Lydiard, a world famous runner and founder of a system of coaching for distance running. It was the same system of coaching Glenn had benefited from in high school. Lydiard was there to introduce his coaching method to the national team, and Glenn served as his English/Spanish interpreter for his two-month tour. Justina has served as a Licensed Spiritual Practitioner since 1994 at Mile Hi Church in Lakewood. They have two daughters from Glenn’s first marriage and two grandsons from the elder daughter. They all live in California, so contact is only by phone. They both say they are SO looking forward to being able to travel and see them again.