In the Footsteps of the Pioneers — 2

We mentioned last week that the Morrison Road took on an early prominence in the region because of the Spottswood-McClellan Stage. The stagecoach transported passengers, Wells Fargo freight and U.S. mail. The run began in central Denver six days a week at 6:00 AM and traveled to Morrison. It was described as comfortable and well-appointed with plush carriages and matched teams of horses.

The stagecoach entered Lakewood at Morrison Road and Sheridan to stop at the Storrs property — later to become Hart’s Corner. It then proceeded via Bradford road to Jewell and Wadsworth, then known as “Midway.” Proceeding west, the stage went south on old Kipling to the Carmody House. The house is still standing. 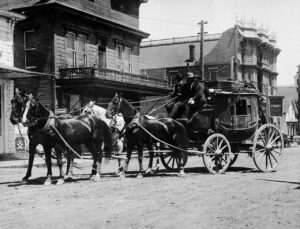 Members of the Carmody family were quite hospitable and even years after the stage was no longer in operation, they hosted strangers who stopped by to visit. The family donated the land for the Foothills Recreation Center as the elder Mr. Carmody delighted in watching the children play and swim at the Center.

Another stage stop down the very steep Kipling hill was The Pennsylvania House, somewhere near Morrison Road. The old footings are lost to time.

The stage continued west bearing to the north side of the bluff and traversed a trail where the Mt. Carbon dam now stands. The road was described as well-tended and a pleasant ride. The terminus of the stage was Morrison, meeting the eastern railhead of the Denver, South Park, and Pacific Railroad. The narrow gauge railroad ran to Alma and Fairplay and was a robust operation for years, delivering miners and their supplies to the raucous and booming mining towns and camps up in the mountains. 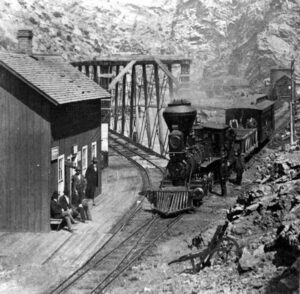 Photo from Colorado Department of Transportation, published on Legends of America website

The stage lines operated by Billy McClelland and Bob Spottswood eventually grew to expand “over the Continental Divide by way of what is now US 50 to Salida, and then northward via modern US 24 from Granite to the town of Oro. The partnership later established another line between Colorado Springs and South Park that also follows US 24.” 1 Before eventually giving way to railroads and highways, stage lines were for a time the lifeblood of remote farms and settlements like here in the Bear Valley area.

In the mining towns and camps to the west, “Silver outshone gold during the 1870s and 1880s, as mining camps in the mountains and southwest of Denver boomed.” 2 We have all heard of one famous couple that struck it rich in silver, and after they built their mansion to join the high society of Denver they established a summer retreat here in Lakewood.

We’ll tell more about J.J.  and Molly Brown in the next installment.

4 thoughts on “In the Footsteps of the Pioneers — 2”