In the Footsteps of the Pioneers — 3

After leaving the smelter smoke of Denver, traversing miles… in reaching the summit, behold the sublime work of nature, a panoramic view of a picturesque valley bursts upon me… Southern Gables.” – Molly Brown.

What? No, we’re kidding! She didn’t say Southern Gables. She said “Avoca Lodge.” In 1893, after making his fortune in the mining business and moving to a mansion in Denver,1 J.J. Brown bought 320 acres out in the country, at what is now Yale and Wadsworth. He had a house built there, and he and Margaret (you can call her Molly if you like)  moved into it in 1897. Margaret named it Avoca Lodge. The name was inspired by the beauty of our location near Bear Valley , reminding her of a poem, The Meeting of the Waters by the Irish writer Thomas Moore.

Sweet Vale of Avoca! how calm could I rest
In thy bosom of shade, with the friends I love best,
Where the storms that we feel in this cold world should cease,
And our hearts, like thy waters, be mingled in peace. 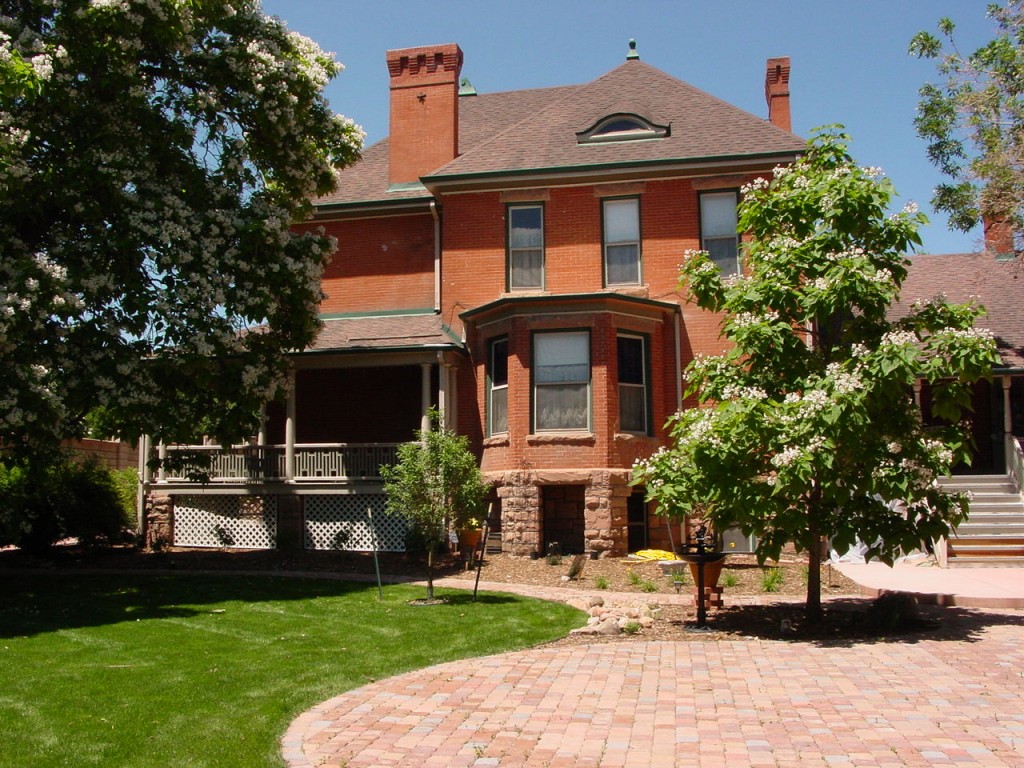 It was more than just a peaceful place to rest, though. They raised their children there, and…

“Through the guidance and ingenuity of J.J. Brown, Avoca Lodge became one of the most productive working farms in Colorado. Hundreds of orchard trees in every variety were planted and produced bountiful fruits like plum, peach, apple and cherry to name a few. Along with produce were a variety of fowl, livestock, and thoroughbred horses, all of which combined to create another form of financial success on the stately property.” 2

Mrs. Brown was already famous before moving to the Denver area and was quite a popular figure around her second home in Lakewood. She occasionally drove her electric car around the nearby roads, drawing crowds. When she would take the 4-hour buggy ride to Denver the students of Bancroft school were dismissed to wave to her. Some have said that her flair for the dramatic arose from her association in her Missouri childhood with Samuel Clemens. She was a friend to the Sisters of Loretto, whom she hosted regularly and assisted in their work of education and social justice. The parties she gave were high profile, energetic, and sometimes unintentionally colorful. One afternoon she hosted a gathering of “high society” ladies and when she ran out of food her reaction to the issue was described as the afternoon’s entertainment.

Originally in Jefferson County, the Avoca Lodge property was later annexed by Denver. After the Browns let it go, it was purchased in 1928 by Robert V. Fehlmann and his wife Rose, with the 100 or so acres then remaining. Almost a century later, with generations of that family’s childhood memories yielding to progress and growth, we now find the house has become the main feature of a popular museum and event center. It is still maintained by Robert and Rose’s descendants. 3

Moving north from Molly Brown’s Summer House, and moving forward in time, we will skip over Lakewood’s newly acquired “Taylor Property” for now. That takes us up to Jewell Avenue, east of Wadsworth. All but our newest residents will remember that the exclusive Green Gables Country Club was sequestered back on that spacious wooded lot. Built on 150 acres by the Reed family in 1921 as a ”honeymoon cottage,” the original estate got its name from the deep green shuttered windows and the roof gables prominent in the structure. The Neusteter Group bought the acreage in 1929 and established a social club which developed into the golf course. The cuisine was termed on par with the Brown Palace. Golda Meir held a fund raiser for the State of Israel on site. The structure suffered a horrific fire in 1983 which prompted a two million dollar rebuild and renovation. Now, of course, you know the property as Lakewood Estates.

The Midway School was a one-room schoolhouse which stood near the Green Gables gate prior to the Reeds’ ownership. It was known as the Montana school. In attendance there was young Marion Scott whose family operated the “Treat” race horse facility, located at Estes and Morrison. She recounted contact with the Downeys, who worked in housekeeping and blacksmithing in the area of the school. Mr. Downey was older (by census born in 1838) and had been a slave. The Downeys fostered their granddaughter, Irene Harrison, who was born in Colorado and attended the Montana school. Irene continued to reside in Lakewood and it is likely that her family still has Lakewood ties.

There are other ties to the early days, of course, that we can see when we look around a little. In the northwestern corner of our Southern Gables neighborhood, the photography studio in the 9000 block of Jewell has buildings which date back to 1892. The land was purchased on a Pacific Railroad land grant in 1892, and the lot and buildings were sold in 1923 to Edna Woodard who lived there for 38 years. The Woodard name became permanently engraved upon the land as Woodard Drive.

These old memories still hover around the land here. The early settlers would be astonished to know how many of us found their idyllic valley and surrounding area the perfect place to make our own lives. The spirit of working together as neighbors, enjoying good times together, and helping one another in difficult times as we do in Southern Gables, still lives on as in the old days.

This is the third in a series of three parts. Part 1   Part 2

2 thoughts on “In the Footsteps of the Pioneers — 3”