Our neighbor Ken Fischer has told us about some interesting characters, but none so far have been connected with mysterious events that were turned into blockbuster movies. Here we have an insight into one of the main forces behind the 1970s film, “The Exorcist.”  Quite a man to admire: football coach, academic, paratrooper chaplain, role model and mentor….

Recently I noted a documentary regarding the “real” story of the exorcism portrayed in the movie formulated by William Blatty. It struck me in the similarity of the movie with the accurate accounting of events. Having some contact with facts and a singular individual directly involved, I thought it appropriate to accurately describe him: Walter H. Halloran S. J.

In this day of painfully predictable and frequent school shootings and the King Herod monsters who cause them, one can surmise that evil and demonic actions exist. Whatever you may call it, the killers exhibit fatal aberrant behavior and lack any compassion for less than total target destruction. Demonic possession? Call it what you will.

There are forces for good, of course, that should not be overlooked. I was pleasantly aware of about twenty dads, uncles, grandfathers, brothers, and generally concerned men who met this week at Green Gables Elementary to reignite the “Watchdog” program. God bless you all and may he keep you and your charges in the palm of his hand. It is good to know that there are, here among us, those who will actively stand up to the evil threat of harm to our loved ones. This story is about another such person, a force for good.

The actual incident depicted in “The Exorcist” was in fact that of a teenage boy in St. Louis in 1949. The lad had been exhibiting strange behavior consistent with what the church defined as “possession.” It would require further examination to be verified and it was. The Provincial (Head Jesuit for the province) assigned a veteran priest, who was hesitant but took the assignment requiring a second priest to take written account and a young scholastic (priest in training) should they need his strength to control the youth. The Jesuits are solid in their formulation. It took 15 years to become a certified priest. They are magnificent teachers and life coaches… mostly.

Ignatius Loyola, a soldier and founder of the order, was sage and strong. Most of the Jesuits I’ve met share those same qualities, as did Walt Halloran, the scholastic assigned to accompany two aging priests in one of the most challenging assignments they would ever have. 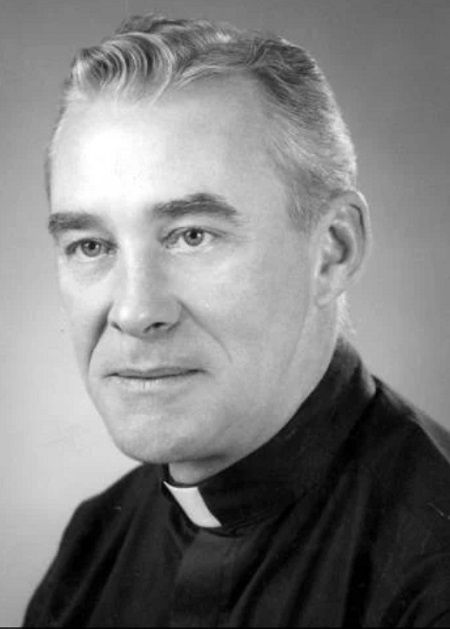 I knew Fr. Halloran in the mid-sixties. He was the dashing, athletic middle aged priest who was the assistant coach of my football team at Campion Jesuit High School. This was a team which would later produce Tony Cline, a gangly freshman who went on to star for the Raiders. Another lean and tough young man, a Canadian by the name of Pat Bowlen, would go on to own and set high standards with the Broncos. Both teammates – lineman – were mentored by Fr. Halloran.

In addition, he was a good coach and athlete. He would smoothly and subtly point out techniques and tendencies to work on. At times he would run passing routes and relive the days HE played for Campion in the forties. Something must have had the heavens in line: during his tenure we went 20 games without a loss and became the #1 high school team in Wisconsin. We missed the #1 designation the year prior due to a team led by Rocky Bleier of Pittsburgh Steeler fame.

He had Robert Redford looks, only in a taller frame. The women in my family made it no secret that had Walt Halloran not opted for the priesthood, there would have been a score of reverse proposals at his option. He politely accepted these compliments with a wry smile.

He was a quiet man who spoke in a lower tone. You understood that he did not mince words in his brevity. I recall a lasting image of Walt walking strongly across campus after dark, his silver hair flowing and his wearing a long cape type vestment.

He did not speak of his experience in the casting out of the devil until after 2000, when the senior priest passed. He was not allowed to do so, but probably wouldn’t have anyway. What he would say was neither an affirmation or negation, but he did verify several of the seemingly supernatural occurrences that had been reported. He had spent significant time during the month from hell with the team, and the lad finally recovered. The boy actually went on to have a normal life as a prominent NASA scientist.

The flavor of Walt Halloran properly expressed in a circumstance I will close with. In the late sixties Walt determined his calling would require him to go to Viet Nam and minister to the troops. Things were heating up and he wanted to do what he was called to do in life.

I am told by reliable sources that Walt politely, calmly and with no deviance he countered that he would be going with or without the collar. He went to jump school at Ft. Benning, joined the Rangers in the bush for a year where he could effectively serve the young men he had watched grow from children to soldiers. He would say later in life that he saw more evil on the battlefields of that war than in the boy’s hospital bed of years before. The paratrooper chaplain earned two Bronze Stars for bravery while helping those young soldiers make it through that terrible war.

I think Ignatius would have been pleased. God rest you well Walt Halloran. You served Him with distinction.