Happy Thanksgiving!  Our neighbor Harry Puncec is as much a proponent of the traditional turkey dinner as anyone, but the season brings memories of one year when there was not a turkey to be had. An alternative was walking around nearby…

It must have been in 1945 right after VJ Day, the day in August when Japan decided to surrender and the war ended. Things were recovering from the austere war rationing rules as the soldiers came back home and tried to fit back into their old jobs. Some did, some never would, and most families just kept on getting by. We were living at the corner of Sherman Street and 8th Avenue in Denver in a duplex with a tiny enclosed back yard. My folks brought a live goose home to live with us. My brothers and I fell in love with it, it was our first family pet after all, and we embraced taking care of it. That’s something of an overstatement as all we did was feed it and chase it around the enclosure. 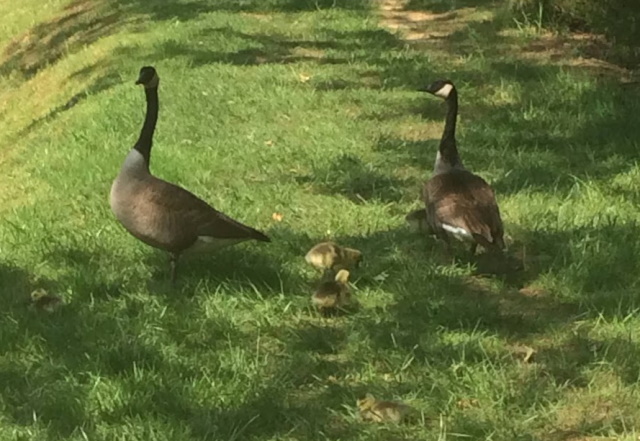 Any farmer will tell you a big no-no is to name a farm animal. Regardless we named the goose Billy as I recall and he – or was it a she? – became family. Things went along swimmingly with Billy, even despite him/her always trying to escape our hugs.

The people who occupied the other unit were a childless couple named Crane. Mr. Crane worked as an engineer on the railroad which made him a hero to us kids. We later learned that he had grown up on a farm and that explains how he became part of this story.

Later in the day we in incomprehension watched Mom pluck the feathers from Billy.

Finally Thursday came around and it was Thanksgiving. As we sat around the table when mom with obvious pride brought out a perfectly cooked and stuffed Thanksgiving bird. While the bird was being carved a vague notion entered my head and I asked if that was Billy?  Yes it was!  I began bawling instantly, followed by Joe and Paul. Needless to say, we refused to partake.

We weren’t cannibals you know.

One thought on “The Big Bird”