Brawling on “The Fax”

This is one in an occasional series about local history and old-time Lakewood characters by our neighbor Ken Fischer. To see more of his stories, click on his name at the end of the article. 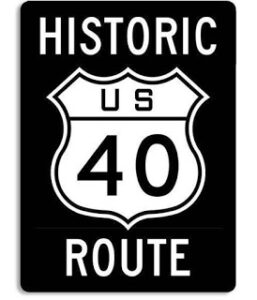 Colfax or U.S. Hwy 40 is a colorful and historic avenue. Wherever you look, it’s got stories. Colfax is known as the “Main Street of America,” the longest commercial street in the country. The ancestral origins of U.S. 40 include portions of the “National Road System” designed in 1806 and the national “Victory Highway” after World War I. Its passage through Denver and Lakewood was characterized by the new modern concept “motor hotels” for motorists. Restaurants, shops, and entertainment such as drive-in theaters sprung up near these early motels, catering to travelers. And there were bars.

Oldsters recall Lane’s Tavern which was an actual “roadhouse” on Colfax staffed by Bunny and Benny Lane featuring two 7 oz. “scoops” of Falstaff for a quarter. Trays of this grog resembled an assembly line. Outdoor restrooms were a 1920s feature which endured 60 years of operation. When some enthusiastic historians forged a plan to move the old log building to Belmar, they were sadly disappointed to find that any attempt to transfer the structure would result in a collapse. Thus the final rest for the beer-soaked roaring 20s venue of fun times: Rooney Road landfill.

A Curious Link to Colfax… Boxing

When we think of Colfax in the old days, we have to admit that many amateur boxing or brawling events — mostly spontaneous — occurred at the rough and tumble bars on the strip. The following episodes have no relation to those time-honored Friday/Saturday night “one round, two hit” bouts in the alley. Two hits? Yes. ”He hit me and I hit the pavement.” 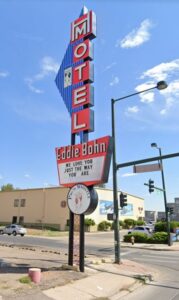 The motel, restaurant, and bar are gone, but the iconic sign is still there.

Going way back to 1924, Eddie Bohn purchased property from his father at Colfax and Wolff. A native of Denver’s west side, Eddie was an adventurer who set out for California by motorcycle, became a successful professional boxer (64-0-2) and was a close friend and sparring partner for Jack Dempsey.

Fortunately for the gregarious Eddie, in 1924 the interstate roadway legislation had just been enacted and Colfax was to become arterial. On Jack Dempsey’s birthday that year, he opened the Pig ‘n Whistle bar/restaurant/motel. It became a training base for boxers and was frequented by a variety of sports and movie celebrities including Dempsey (room 39), Billy Martin, Roy Rogers, the Dorsey brothers, Sugar Ray Robinson, Clint Eastwood, and many more. Eastwood filmed part of his movie, “Every Which Way But Loose” at the famous site. Eddie was a philanthropist and fundraiser for many charities and used his celebrity connections to advantage. For one event he hosted, he had the Coors brothers come and work the taps.

In the 65-year run, Eddie himself was a main attraction of this original “sports bar.” If you didn’t meet Eddie, you missed a great storyteller referring often to the multiple pictures on the walls. According to his son, as Eddie sat and ate with his guests, he could hardly have cared less if you were the governor or a plumber. Eddie died in the 90s but left a legacy of charity and camaraderie tough to match. 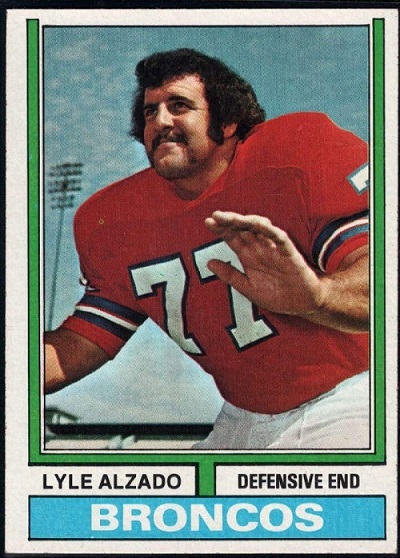 Just down the road and a few years later, the Broncos went to the Super Bowl for the first time. Their spirited, popular, and fan favorite all pro defensive end, Lyle Alzado embodied the spirit and gusto of the team and their ecstatic fans.

In the following summer, Lyle later admitted that he was “reading his own press clippings” and got “too big” for the Broncos. One ill-advised endeavor in the wake of the Super Bowl was an exhibition boxing match with Muhammad Ali at the old Mile High Stadium just off Colfax. Ali was aging, out of shape, and going broke. What was billed as an exhibition soon evolved into what Alzado determined was to be a test of boxing skill. Alzado had golden gloves experience and felt he was significantly above the novice level as a boxer. A chance to show well against “the greatest” was very alluring. Fans were divided about Alzado’s venture. As it turned out there were probably better brawls in the bars and taverns along Colfax, over whether he should do it or not, than at the main event.”

Alzado came out throwing haymakers and attempts at hard body punches. Ali danced and fended off any serious contact. Alzado became verbal and challenging which seemed to surprise Ali, who showed several quizzical looks. Alzado continued his “Rocky-like” posturing for several rounds with Ali blithely backing away, throwing “puff” punches, biding his time, just attempting to complete his contractual agreement. Alzado’s frustration was evident and he appeared to feel he could match if not better the timeworn champ. He continued power punching but landed no significant blow.

After a forceful push away, Ali clinched Alzado and apparently outlined the potential result of trying to turn the event into a reality show. Subsequently, Ali “tapped” Alzado several times to demonstrate the difference between pro and golden gloves boxing.

The fight ended with a disappointing gate and a disgruntled Lyle Alzado. The angst persisted to a boiling point on the gridiron and Lyle soon left the Broncos, to the dismay and sadness of Orange Crush fans who had loved him. It may well be said that it was the boxing that took the fight out of him, and he became a Cleveland Brown. As if that wasn’t enough (“Say it ain’t so, Lyle”) he finished his football career as an LA Raider. 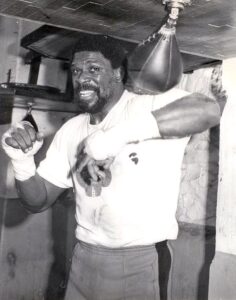 Another Lyle, Ron Lyle, was a convict who rose to contender. He had a power punch which “could have disintegrated a cement block.” A troubled young Denverite of humble means, he challenged Muhammed Ali at the peak of his career in 1975 for the world heavyweight championship. The fight was in Las Vegas and Howard Cosell did the play-by-play. Lyle was winning on points until the eleventh when Ali landed several hits, stunning the challenger and a TKO was called. Many felt that the referee prematurely ended the fight; Lyle was on his feet and vociferously protested the stoppage. Even though he lost, he “showed up” that night and was at his best. It was to be the pinnacle of his career.

In later years, Ron Lyle opened a gym on Colfax in Lakewood. He would train youngsters in the fight game. He was a well-known character with diverse business and recreational interests, some of which got him in trouble — and in debt. One sunny afternoon, Two west Denver brothers with a tough reputation showed up at the gym and awaited Lyle. Their patience had run out over a debt he allegedly owed them. These fellows had some “smoker” experience 1 around town and were by no means novices to the boxing game.

Witnesses’ accounts differ minimally, but in short, Lyle was ambushed. He arrived and exited his Lincoln then was immediately accosted by the dynamic duo with a “power advance”… which evolved into a 4-hit “Laurel and Hardy” short. Final score; two thugs down. When police arrived some minutes later, the would-be “Rocky Balboa” brothers were still attempting to recall what was the number of the human locomotive that ran them over in 12 seconds. Colfax Avenue could be a tough place.

Ken Fischer holds a Master’s Degree in Education from the University of Iowa and was involved in organizing Iowa’s first Law Enforcement Training Academy. He was on the SWAT Team in the Lakewood Police Department, and retired as a Senior Sergeant. His experience includes refereeing altercations between contentious Colfax Gladiators. A longtime resident of Southern Gables, he is an experienced woodsman and now runs a firewood business.

3 thoughts on “Brawling on “The Fax””