This story by our neighbor Ken Fischer was prompted by his reminiscences about policing the raucous old-time bars along Colfax. You may have seen that story back in November, Brawling on the Fax. Turns out our famously rowdy street (in the old days) wasn’t the only scene featuring this retired cop dealing with colorful characters.  Following this story you can find more of Ken’s stories by clicking on his name at the end of the article.

He was a small Irish kid with a plucky attitude. He came from “the flats,” where he slept in a closet, ate generic beef and whatever the mission could provide his salty but savvy mother on Saturdays. Occasionally he would luck into some buyback beef or pork product that the Dubuque Packing Company (“the Pack”) would make available at no cost to needy workers. It bothers me that I cannot remember his name. Something like Dougherty or O’Brien. Say Dougherty. He was quietly proud of his heritage. Several Saturday nights a month, he would put into practice the lessons learned from battles with his brother and attempt to win a twenty-five dollar prize at the Riverside Bowl open boxing smoker. 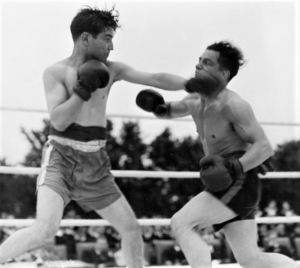 I have no idea why these throwback battles were called smokers unless it was that the room was heavy with smoke. Most attendees did smoke and mostly Camels or Lucky Strike. “Dougherty” was living proof that you could say anything to someone so long as you smiled when you said it. Example: Another one of my aberrant buddies often tested this provision in later years when he addressed a street contact with, “You’re dull normal, life is going too fast for you, your feet stink and you don’t love Jesus.” When delivered with a broad smile, this seemed familial and when not taken too seriously, broke the ice for an interview. In Dougherty’s phraseology it was “Hey Fish, beat anybody up this week?” We were frequently present at many of the smokers due to the predictable nature of the patrons attending the Friday Riverside Bowl Boxing (brawling) Foray. Normally one off-duty policeman was required at any function featuring alcohol. This place required two cops and sometimes as many as seven. Not many cops wanted to work it for four dollars an hour cash, as the potential for injury was high. The enforcement normally entailed running unruly patrons out the door or turning them over to less-drunk friends, who usually deposited them in their car. Rarely would there be traditional arrests. That course of action was reserved for patrons needing hospitalization or those with broken bones. 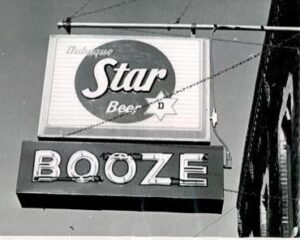 A debatable elixir was the grog of record: Dubuque Star Beer. The best beer brewed in Iowa (the only beer brewed in Iowa) just feet west of the Mississippi River. Scurrilous rumors held that river water, coloring and a hearty dose of alcohol yielded this brew. A rumored chemical analysis once resulted in the lab advising “your horse is very sick.” The critical aspect for “Star” was that it was cheap.

What occurred in the packed parking lot remained in the parking lot. The bonus for working this four-hour off-duty assignment was an included perk of two additional hours of free beer and bowling, after a change to civilian clothes of course. Friday was payday at the Pack, Riverside was just up the riverfront, and they would cash workers’ paychecks. There were four weight levels of pugilists: Light, Middle, Heavy and Bigfoot. A five dollar entry fee, age over 18 years and the ability to stand unsupported were the only entry requirements. 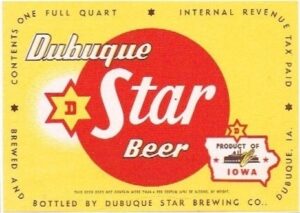 Ahh, the old days. Good old “Dubuque Star” is extinct. The brewery is now a wine shop and a historic attraction.

Dougherty was a lightweight with aspirations to fight middleweight. He knew he was tougher and faster than most of those pugs. He contemplated putting weights in his pants pockets to achieve this level, but even then he would never be mistaken for 150 lbs.

The other problem with this tactic would be keeping his shorts up. His boxing shorts were from a thrift store and they looked strikingly similar to basketball shorts-two sizes too big for him, but the price was right.

His corner “men” consisted of one male friend, whose mouth often got too far ahead of his brain and his spindly body couldn’t defend him from the results of that mismatch. He also worked at the Pack and showed up exclusively for the ladies and occasional free drinks. The other corner man was Dougherty’s girlfriend. She was his age and the female mirror image of him: Nice-looking, smallish, streetwise. She was also quietly but obviously deeply in love with him. She disagreed with his need to box, but knew he would do so with or without her, so it would be with her. She also had relatives in the audience who would allegedly support Dougherty’s boxing career. Actually, she feared for his safety and the negative effect that his brain damage may have on their potential children.

Alas, Dougherty was a better singer, butcher, talker and probably four other things than he was a boxer. Of the several critical talents a successful boxer should have, He was always one short: defense.

Way before the movies gave us Rocky, Dougherty fashioned his boxing style around being fast, hitting with frequency, attack then attack some more and move around the ring. His flaw, Achilles heel, chink in his armor was a poor defense. Things would start well, he would score points and actually lead until somewhere in the third round when his guard would drop and the opponent would land what we later referred to as a “good night fist.” My normal partner and I had an ongoing bet for a McDonald’s dinner, on just when they would call Dougherty’s fight over.

These were the days before concussions were recognized and the victim of a bad head shot would be “examined” and told to “shake it off.” If he could later stand and count to ten, he could return to battle. The comic relief in these organized brawls would be a loudmouth fighter (not a crowd pleaser) “blowing hot steam out his piehole” up to and during the early rounds. Then a less volatile, but more proficient opponent would land a strike on blowboy’s mainframe, Mr. Mouth would drop like a side of beef and all would be quiet again.

In Dougherty’s case, he talked not at all, but delivered a patterned foray of punches, which usually did minimal damage. The grand finale would be monitoring Dougherty sliding backwards across the ring and exiting the ring under the bottom rope after faking left and going right. Yes, right into the power thrust of a head-on haymaker, which usually rendered him inoperable for the ten-count.

I do not know what ever happened to young Dougherty. Hopefully, he suspended his boxing career, married that lovely lass and populated the earth. Having dropped out of school at 16, and going to full time at the pig plant to support his disjunctive family, he had major challenges in his life. I like to think that this feisty Irish kid with a dedication to hard work and boxing may have joined the ranks of the successful and achieved some piece of the American dream.