An occasional series about local history and old-time Lakewood characters by our neighbor Ken Fischer. To see more of his stories, click on his name at the end of the article.

This is a story about a couple who were definitive of a generation we may never see a match for again. They were aptly called the greatest generation which brings on the inquiry: how can you tell the entire story if there are still chapters to be written?

Their story is complete and they were solid. They honored the flag for reasons that many of today’s icons cannot digest. They were Americans and that is still a good trait to possess. I met Harold one sunny day after being directed to a small ranch home in the center of Lakewood. Humble but clean and adequate. 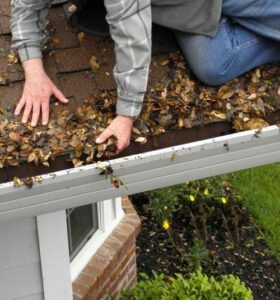 He had been cautioned about getting on his roof to remove branches and leaves. He was having dizzy episodes incumbent with 80 years of hard work. The city afforded volunteers to assist seniors in this activity although Harold felt completely comfortable doing it himself. It was the perspective of attempting to rationalize going up a ladder with his bride of 55 years that made him take the path of least resistance and accept help.

I had been at the door jousting with a female voice for a few minutes. She was giving no quarter and rasply interrogated me as to my presence. In short, she was not buying my goods and the 4 dead bolt locks on the front door assured no contact short of a SWAT crisis entry. “Deal with Harold…he’ll be back shortly” OK.

Shortly, a snappy green Mercury Cougar rolls into the drive and out pops a short but serious gent probably in his eighties. “Who the hell are you?”

I explained. He allowed me on first base. “So you met the wife? Ain’t she a pip? We ‘re married 55 years, no kids yet… wanted to see if it was going to work.” Old school. Pretty fast old coot. Not to waste any time, he floors me with his next one-liner: ”How do I look for a dead man?” Among the multiple choices for response, I had no game. So tell me the story, Harold. 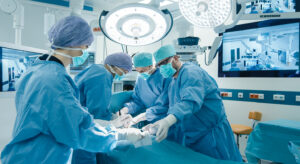 He did. Two doctors advised that his heart was damaged enough to require immediate surgery but both declined, advising that he would die on the table. No light at the end of this tunnel. The third doctor advised a 20% chance of survival. Better odds than Vegas. He took them and survived despite dire predictions. He noted there are more old soldiers than old doctors and he had been a “Marine Raider.” 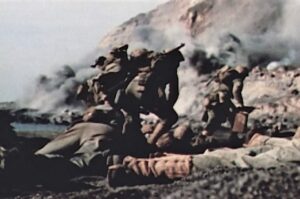 I queried, “Marine?” Nope. Marine Raider. A special force established during WW2, a precursor to the Navy SEALs and a tough bunch tasked to accomplish any difficult assignment regular troops were not trained for. The unit was disbanded after the war, possibly based on a visit from Eleanor Roosevelt to her son’s Raider unit. Their living conditions were very marginal and their tasks seemed monumental. 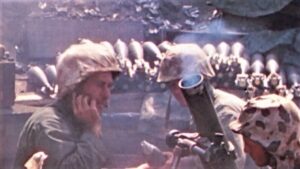 Harold was bristling proud of his service in this group, but as was the norm in his generation, he spoke little about specifics. These men knew what they did and that it had to be done, so they got on with it and returned to their beloved country to speak English, not German.

I stopped by regularly to visit and learn. Harold had several careers but mostly in hardware. He had about 100 wood bins, accurately marked for content and he knew “stuff” about repair, fittings, durability and quality.

Priscilla was another page in the book. Feisty. Hard bark. Strong faith and an obvious knock down drag out love for this little man who saved democracy but couldn’t find his glasses. They sparred. She was four foot nothing and went about fifty pounds, but a tiger with a voice from the wizard of Oz.

For several years they were a stop at least in spring and summer. Trees needed trimming, leaves needed gathering, and they needed some light assistance to take advantage of services offered to seniors such as grocery delivery.

Harold had a stroke a few years into our friendship and was placed in a nearby nursing home. Priscilla went to be with him as often as she could get a ride but he was failing. He passed within months. At least twice a summer she would call to have her back lawn mowed. The dilemma was in convincing her to have her dogs utilize a given sector of the yard to do their business. She would wait for the grass to reach over a foot before asking for a mow.

The resultant was not only a mow but a launch of material and a tricky cleanup of the mower. No big deal. A gas mask. A pressure washer and a plastic suit. She earned the task. It always bothered me to see her collection of deadbolt locks. Finally I convinced her to have a friend who did locks on the side to examine her tribute to Fort Knox. I was impelled by the image of Priscilla fighting with the wrong key in the wrong lock as fire lit up her nightgown.

A victory allowed me to sleep better knowing my friend Ken Stratton replaced worn and dysfunctional double cylinders with single cylinders. As usual, Kenny did it on his own dime. I happened to be on a mountainside one afternoon dropping dead trees when the phone rang and it was her. More frantic than normal, she could not turn off her shower! The time honored rotary handle “would not work”. Harold had installed it in the sixties. Things just don’t last anymore!

I dispatched my good wife, Pam, to get over there and prevent a flood. Secure in the belief Pam could get through the front door without a locksmith AND that Priscilla would let her in, I awaited good news.

And it was. No plumbing problem. Priscilla had lost sufficient strength over years to finally be unable to push the shower valve inward to shut off the water. 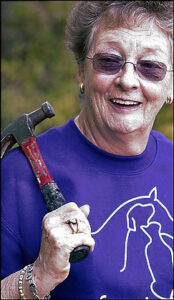 No, not Priscilla, but she could swing a mallet. Photo from ZDNet.

Solution: a rubber mallet capable of driving the valve inward. Now if she would only keep it nearby….

I had not heard from Priscilla in spring and summer was upon us. I went by the house and there were no signs of problems. There was no answer in repeated calls.

I knocked. No answer.  Strange. No dogs barking either.

Priscilla had died a few weeks earlier. There were no immediate relatives. Married going on 60 years, no children, seemed like nobody was left to remember them, except possibly a niece in Arizona.

I remember them, and now maybe you will too, a little bit. God bless them both. I mused that they were again bickering and parrying verbally with one another and enjoying every minute of it.

One thought on “About Half Tough”