Our neighbor Harry Puncec wrote about growing up around the busy shops and yards on Denver’s Broadway, and some of his experiences as a child there along that once-vibrant city centerline. His story about Broadway and Colfax was titled “Crossroads.” He picks up another chapter here, with a different kind of “crossroads,” coming of age in a Denver orphanage. Orphanages have disappeared, but memories remain.

When society moves on there are few tears shed for lost institutions.  Orphanages certainly are included in that lost category.  Between the devastating descriptions of Charles Dickens in “Oliver Twist” and the recent scandals involving Catholic orphanages in Ireland and other places it’s hard to find a champion for the concept.

Foster care is the government’s lower cost answer to adrift kids.  So now we have scandals in that type of care where before there was a blanket of silence and invisibility hidden behind orphanage walls.  Progress?  I’m not so sure.

In September of 1951 my father died from lung cancer.  Within months my mother collapsed and ended up in the hospital.  My two younger brothers and I were shipped off to Mount St. Vincent’s Home for Boys, a Catholic orphanage on the 4100 block of Lowell Boulevard while she recovered.  It’s now called Mount St. Vincent’s and no longer an orphanage.  I was eleven when we arrived and was placed together with my next younger brother, Joe, with the older kids. Our youngest brother, Paul, landed in juniors where we rarely ever saw him.

Our first meal there was dinner, which was served up in a large dining room located right off the kitchen.  Ten boys would sit at each table and the food would be deposited in large serving bowls at the head of each table to be passed down for each to take what they wanted.  Joe and I were sitting at the far end, a reflection of our status as the new guys, and finally received bowls and dishes nearly empty or containing the most unappetizing portions of food, fried chicken and mashed potatoes as I recall.  Being somewhat terrified we kept silent and hoped that we would be ignored.  It wasn’t to be.  Shortly after we had taken our portions the oldest boy sitting at the head of the table growled, “You guys dainty?” 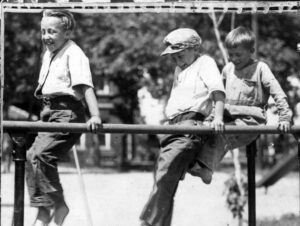 We had no idea what dainty was but we could tell from his tone that it was something we really didn’t want to be.  We looked at each other desperately and answered, “Of course not!”  That was our introduction to our new companions.

One of the boys at the table became our best friend and mentor at St. Vincent’s.  He had arrived there years earlier after his father had murdered his mother and went to the electric chair for the crime.  At first he was quiet and reserved with us but seemed to understand our trepidation.  In time he opened up to make us feel welcome as he showed us the ropes. 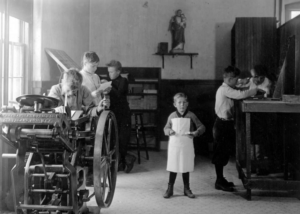 Every day we were given jobs to perform: make your bed, sweep the room, clean the bath and shower rooms, and help in the kitchen.  On Saturday morning we all reported to the laundry where all the clothing and bedding was cleaned.  The building was filled with steam with water dripping off every surface, and a huge mangle dominated the room.  Wet sheets were taken from the washing machines and two kids would feed them into the mangle’s heated drum from the front.  My job, again being the new guy, was to peel the now dry sheets off the drum in the back and fold them for storage until needed.  The leading edges of my fingers above the nails were constantly blistered from the scalding heat.

An orphanage sounds like it must be a grim place but there were special moments that I recall with warmth.  Case in point, the dorm room where we slept.  It was typical institutional (like the Army), large and unadorned with about eight bunks lining facing walls.  The only piece of furniture other than a small table next to each bunk was a large four legged table in the middle of the room with one appliance upon it, a radio.  Each night after lights out it would be played softly which seemed to calm everyone.

Some nights it was a comedy show so we were able to relax and chuckle in the dark.  Other nights the station tuned to would play the Lux Radio Theatre, a one-hour radio reenactment performance of a recent movie before a live studio audience.  It’s hard to explain the impact it had on me.  No matter how the day went once the lights were turned off, the conversations ended, the theme song for the next program began to play, and I was transported.

My imagination visualized events from the dialog, narrator’s voice overs, and sound effects.  It was powerful!  I recall a story where two evil people did bad things and I could picture it all so clearly.  They would hide alongside a mountain road after dark and when a motorist would approach they would sprint out onto the road with a highly reflective sheet of metal between them.  The oncoming driver would suddenly see headlights coming direct at him — not realizing they were his own reflected lights — swerve, and plunge off a steep precipice to his death.  Later the bad guys would climb down (with much grunting and scraping) to rob the car and body.  You could see it all happen in your mind’s eye.

Of course the killers were caught in the end — good riddance — and I was then able to sleep.

I managed a minor revolt once during an epidemic of three-day measles that swept the Home.  While sweeping the floor of the chapel with a small hand-broom, a once-a-week chore, it dawned on me that I could pat my stomach with the hard bristles and get a temporary rash similar to a measles rash.  As the supervising nun came down the hall I smacked my gut and when she entered I complained of not feeling well.  One look at the horrible rash on my abdomen and I was sent off to the infirmary to join the other, truly sick boys.  Within a day I had a real case of the measles and settled in to enjoy three days of bed rest and relaxation.  In the end though, the laugh was on me because about then the orphanage received an order of tainted meat from somewhere and just about every kid in the place got violently ill.  The bad meat combined with the measles left me embracing the porcelain bowl for dear life while praying for sweet death.

Terrible existence, right?  Well, not exactly!  Every boy in there had experienced great personal loss and alienation.  We were equal in many ways, in the work we performed and the games we played.  We joined together to steal extra candy from the nuns and to hide out when it was time to clean up.  When escape was impossible we worked as a team to get the job done.  For instance one boy would ride and two boys would direct the large buffing machine we used to polish the dayroom floor.  The work flew by as we kidded each other and felt at home in our common hardship.  I entered there with two brothers and left, several months later, with dozens. 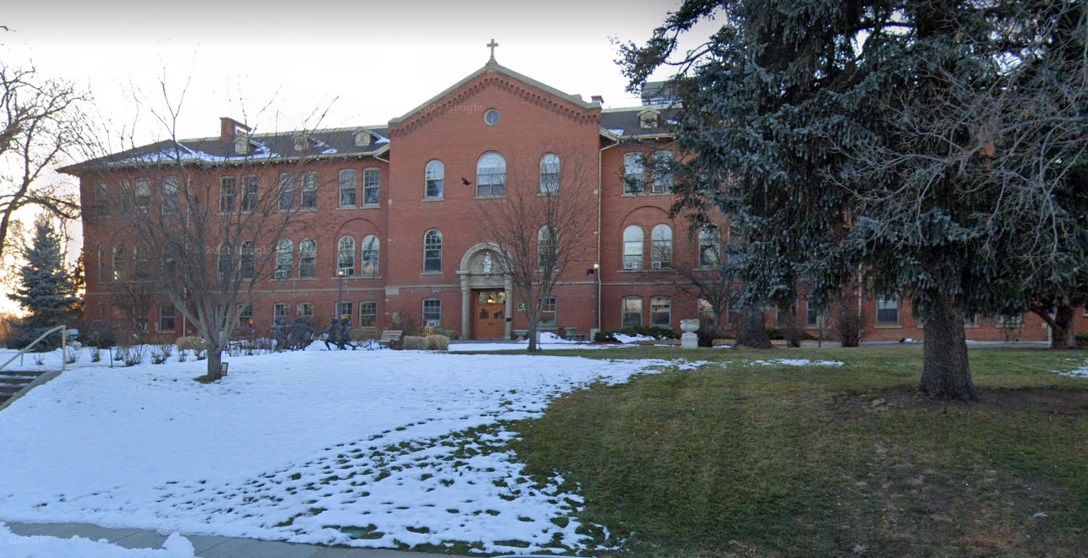 3 thoughts on “The Orphanage”