The morning started off a little chilly in the Southern Gables neighborhood, with a warming trend promised for later in the day. Doug and Judy Whitten arrived early at the Fleischer Family Farm, and set up some tables with coffee and doughnuts, and a jug of cool lemonade in anticipation of working in the warm afternoon. Signs were set up on the nearby street corners, with arrows pointing toward the farm, “Leaf Drop.” Paul Fleischer, the farmer, and Christy Cerrone of Sustainable Southern Gables went about setting up some traffic cones and more signs, and making last-minute arrangements. Some of the trees around the farm released a few of their remaining leaves to the early morning breeze, and leaves rustled around on the ground. They would be joined by more leaves during the day — bags and more bags, boxes and truckloads of leaves. All the leaves would be put to use as mulch and compost on the neighborhood’s own “urban farm,” rather than ending up as useless trash in a landfill. Leaf Day! 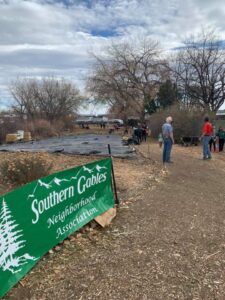 Leaf Day in Southern Gables is a special event, bringing community members together and doing a good turn for the environment. In the seven years that the leaf collection day has been held, 35 tons of leaves have been saved from going to landfill.

It wasn’t long before Doug and Judy were joined by volunteers (all wearing masks of course), a few at first and then more, until during the course of the day there were 64 people working together. A car or truck would come up and be met on the street by Judy and her friend Monica Abelein, and logged in with a count of how many bags were being brought. Judy and Monica also tended a registration table with community information and a “donations” jar to benefit Green Gables Elementary, the school that holds our little neighborhood together. A good number of neighbors noticed it without mention, and offered donations. After being counted in, the vehicle would be sent ahead to be marshaled into place by Bruce Loftis. When it stopped it would get swarmed by volunteers — mostly teenagers — unloading the bags of leaves and using a fleet of wheelbarrows to take them to be dispersed. Students from Carmody Middle School, Lakewood High School, D’Evelyn High School, Alameda High School, and Westwoods Community Church all worked together while doing a pretty good job of social distancing. Christy Cerrone was the liaison for the student volunteers, and Tyler Amedon, the principal of Denver Christian Academy, came and helped as well. 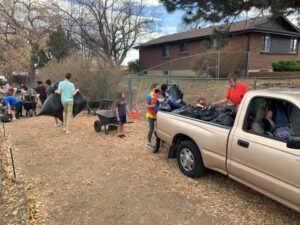 A big part of the leaf project took place the day before; students from Denver Christian Academy were dispatched to rake leaves for disabled and seniors who could not do their own. Then on Leaf Day the bags were collected by volunteer drivers, headed up by Ken Fischer with his two-ton dump truck. Greg Abelein made the pickup rounds too, bringing load after load. Helping to unload the trucks, and going out to disperse the leaves along with the students were Drew Cole of Westwoods Community Church, Bruce Loftis, Monica Norvall, Kim Ryburn, and me. 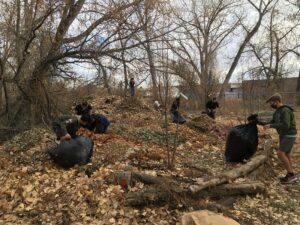 There were two areas where the leaves went: first, the Pumpkin Patch near the entrance. That plot will be expanded and used in the coming year for pumpkins again, and there will be squash and other gourd crops too. Paul said that part of the plot might be used for a trial run of corn, provided the squirrel community can be convinced to let him grow some for us. After that area was covered with leaves, packed down, and covered with a tarp (visible in the top picture), all the rest of the leaves were sent to a far corner of the two-acre farm to form a new mountain. “Leaf Mountain” will eventually turn into rich compost and be spread over other plots and rows, but for the near future it will be a mountain for Paul’s two children and their playmates to conquer. 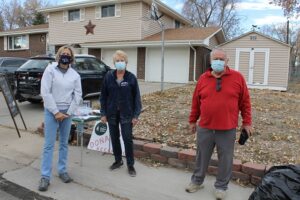 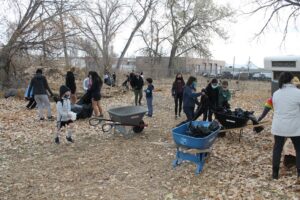 This year’s haul added almost 800 bags of leaves to the Fleischer fields, to turn into compost and enrich the soil for years to come. This is the second year that the neighborhood has put the leaves to use at the farm, after five previous years sending them in 30-cubic-yard dumpsters to a commercial composting facility. Dale Trone was the neighbor who proposed the idea of using them at the farm rather than sending them to the composting facility for other people to buy. Having them benefit the local environment directly is a great feeling. As Paul Fleischer told us in summarizing the results of all that work, keeping this leaf mulch out of landfills and amending it into the soil provides nutrients for the farm that provides food for our community.

And that’s all good.

If you like numbers, here are some for you.