Click a pic, browse through the excitement of choosing a new home in the early days of Southern Gables: gracious design and quality construction, with the best modern features for luxurious suburban living. 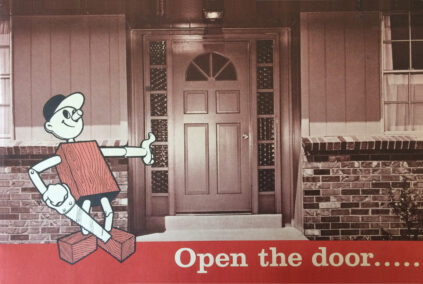 Wood Bros. Brochure. What do you suppose they called this character… 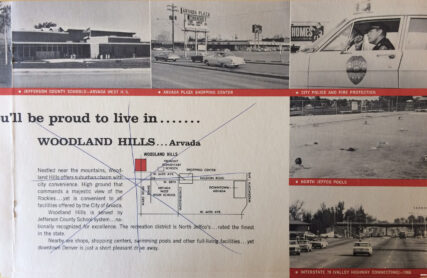 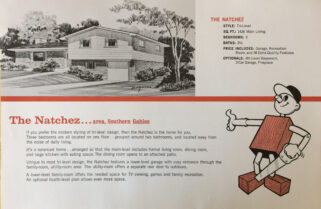 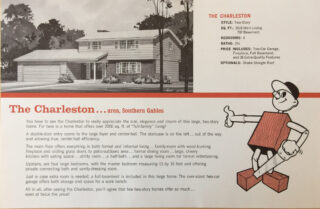 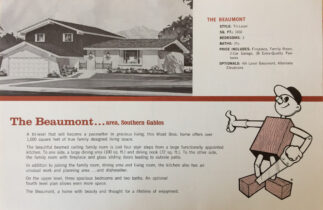 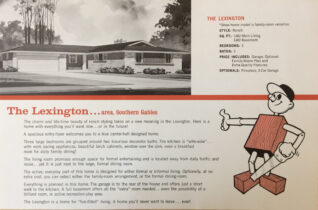 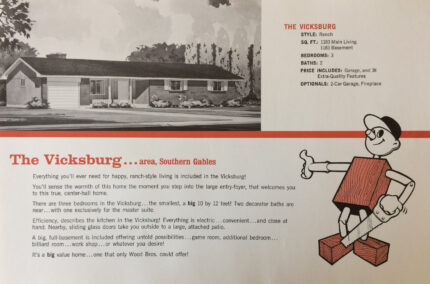 Description of “The Vicksburg” model in the Wood Brothers brochure 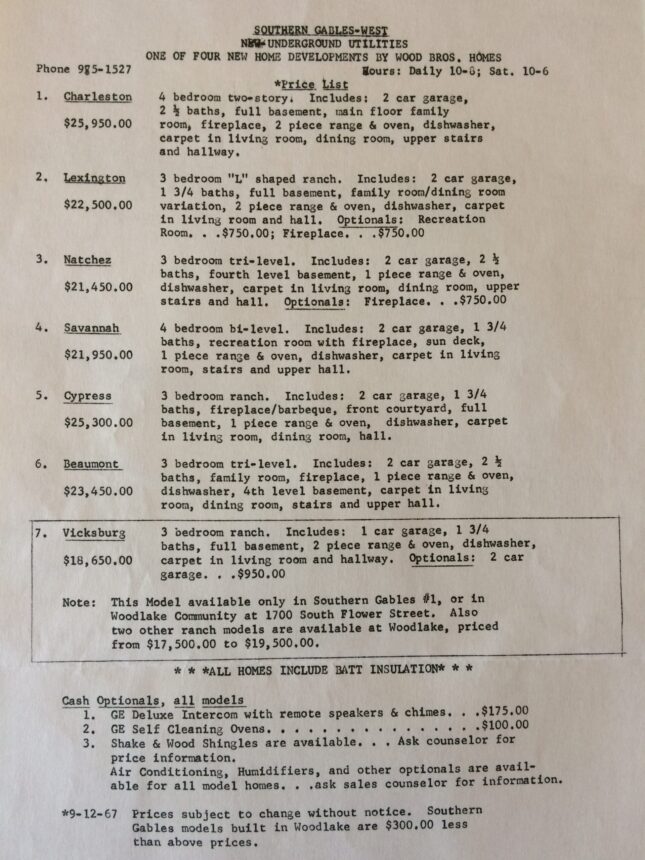 Thanks to Roger and Nancy Frenette for photos of their Wood Bros. brochure, that they shared for the Southern Gables 50th Anniversary Celebration we held in 2017. Our late neighbor Bob Purvis told us back then what it was like to choose a home in the new development.

The lot we chose was in a wheat field, behind the show homes that had been built over on Wadsworth. We measured off from Jewell (paved, 2-lane) and the ditch to identify where our lot would be and see the view from there. We chose the lot before Wood was ready to sell; they said it would be early 70s. Then they moved up the schedule and opened it up in October 1967. We moved in in February 68.

There were a number of builders who developed plats within Southern Gables, but Wood Brothers left a distinctive mark with their “Southern” themed home model names, opening up the area around 1967. Craig Homes was a builder in the western part of the neighborhood, in the early 1970s and another was Russell Smith. “Neighborhood Pioneer” homebuyers in that area told of open pasture behind the houses, and assurances that Garrison Street would remain a dirt path down to connect with Estes.

Other early-day stories tell of the Green Gables School being “open plan” with no classroom walls. One neighbor said “It was a madhouse, but the kids learned somehow.” It was an advantage that the kids who could progress faster in some subjects were not held back, like they would have been in a regular classroom, from advancing at a pace that was best for them. Kids are pretty resilient. That’s a good thing to remember in these times as we face the future with remote learning inserted into the picture, even now to a degree as yet undetermined.

Runyon Brothers built in the southern part of the development, north of Valley View in the early 1970s. A distinctive feature of the Runyon homes was that they were built with dedicated food storage accommodations conforming to LDS Church standards. Another builder around that time was Secord, and he was a teacher at Kennedy High School. The Valley View homes (between Iliff Lane and Morrison Road) were built in the late 70s and early 80s, and photos from as late as 1982 show open views where houses would be built later. Loren DeShazer, in connection with the 2017 Anniversary, said that his house was built in 1977 and,

Not all of the houses were built when we moved in. There were 3 or 4 built after mine. There were none below, to the south. Lots of motorcycle trails down there. Dave Schoen got the neighbors together to build a wire fence all along the south side of Iliff Lane, and that calmed things down pretty well.

Thinking back on the early days of Southern Gables, Rich and Marsha Wagner told us,

The meadowlarks sounded so pretty with their singing before the rest of the houses were built. There was open space for the kids to play and fly kites. The little kids grew up together, became good friends. In the days when not many moms worked outside the home, there were coffee and bridge get-togethers while the kids were in school. We had a babysitting co-op. And walking to school! They all did that, and there was not a thought of it not being safe.

Lakewood police wore slacks and blazers, kind of an experiment in being more approachable and community-involved. They were great with the kids. When a teen party got too big or loud they set up entry points and made the kids who were coming in dump their beer before letting them come in to the party. Their presence would keep the party tame enough. Very low-key, typical of the friendly neighborhood.

One common theme we heard at the 50th Anniversary Celebration was that what people liked about Southern Gables was having neighbors who became long-time friends. That’s a good thing wherever you live, isn’t it?

One thought on “Wood Bros. Homes”