The Day I Stood in for Ernest Hemingway

An occasional series about local history and old-time Lakewood characters by our neighbor Ken Fischer. This time, Ken tells one on himself instead of some other old-timer. To see more of his stories, click on his name at the end of the article.

About twenty years ago I was privileged to serve as a substitute teacher at my son’s high school. My assignment was an honors English class for two hours in the morning when the instructor needed the day off.

The ten o’clock hour arrived and I surveyed the young scholars to be normal teens full of juice and not totally invested in a two-hour study hall, which was the norm for a substitute assignment. They had been given some work to do for the session but I was a little hesitant; this was an honors English class. I was not equipped to add value to an advanced English class. I noted a percolating sound volume growing uncontrolled in the room. In a voice loud enough to be well heard, I mentioned to the front row of students that I had limited experience as a substitute and I was ill-prepared to discuss Chaucer. The response was eye-rolls. They didn’t want to be babysat by a rank beginner, any more than I wanted to just let the class slide by without them doing their assigned work. The background noise of inattention grew louder. 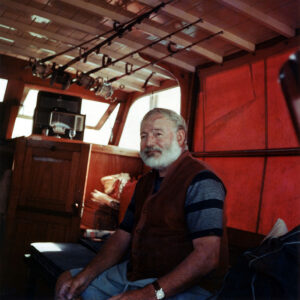 Hemingway in the cabin of his boat Pilar, off the coast of Cuba, c. 1950. Public domain photo, JFK Presidential Library

I needed to get their attention. Raising my voice even more I started out, “Well, it’s true that I haven’t done much substituting…”

A few students as far back as the second row looked toward me.

“… but once I substituted for Ernest Hemingway.”

Attention gained. A deal was fashioned. Should they behave and do what was required for the two-hour span, I would tell the story. I love to tell stories. They would do their work, and give me ten minutes at the end of our time.

Precisely at eleven fifty, books slammed shut and the students eagerly reminded me of the bargain. I was on, to dispel the obvious doubts of the majority of the class.

The story begins… my beloved sister was married in the fall of 1960. She was a nurse at the Mayo Clinic in Minnesota. She and her good husband Dr. John (no, not that one) were expecting their first child in approximately June of 1961.

As the fates allowed, My sister was assigned as the primary care nurse for a patient on site to deal with heart trouble. He was signed into the hospital under an assumed name, but his actual name was: Ernest Hemingway. My beloved sister, my pal since birth, got to know him quite well and delighted in his stories and experiences. He was a man who lived, squeezed the juice out of life and related it to the masses in a singular style. She really liked the duty and he liked her. Everyone did.

Not an individual to miss a good opportunity, Dr. John floated a request that “Papa” Hemingway stand up for their first child as godfather. Hemingway gladly agreed. What a family picture that would be!

As the fates allowed, the bass-voiced author would resolve his ”heart” problem in June of 1961. My nephew Robert Spalding was born in July shortly after the author took his own life. Hemingway left his walking stick to Rita, which is among her most prized possessions. I was the designated “substitute” for him at the Baptism and stood tall after his name was crossed out of the record and mine added.

Oh. Sister Rita… Both she and my mother received inscribed copies of three of Hemingway’s foremost works. My mother lent them out and they unsurprisingly disappeared. My sister’s copies were never to leave the house, but her five sons — equally mischievous as the class in front of me — often “substituted” a pirated copy of one of the works with inscriptions describing a night of debauchery with their mother. “Oh, you boys!!!”

Rita was quite surprised by Hemingway‘s death. “He was so alive and full of vitality.” He spoke of adventures past and anticipated those to come. Who knows what demons lurk deep in a man‘s soul.