Continuing our series of interviews with our Southern Gables neighbors, to help us get to know and appreciate each other.  Stanton and Maria La Breche raised their family in Southern Gables and have contributed greatly to the community over the years. Interviewed by Bruce McDonald.

Well, Stanton, How long have you and Maria lived in Southern Gables?

Hey, that’s quite a milestone! Maybe next year on that date you could have an anniversary party and invite us all over. Now, what is it that you like about living here?

We like the relative peace and quiet and low crime, along with the well kept homes and landscapes. We especially like the million dollar views from our home of the Bear Creek Greenbelt and beyond. Certainly, we value the friendly neighborhood as witnessed during the recent heavy snowfall where a neighbor cleared my driveway with his snowblower. Southern Gables turned out to be a great place to raise our two sons. Our oldest is 40 (Ryan) and youngest is 37 (Jason). Ryan and his wife Larissa have blessed us with a granddaughter, Helena. She is two and a half years old and quite a joy. Maria enjoys babysitting her at least one day every week. 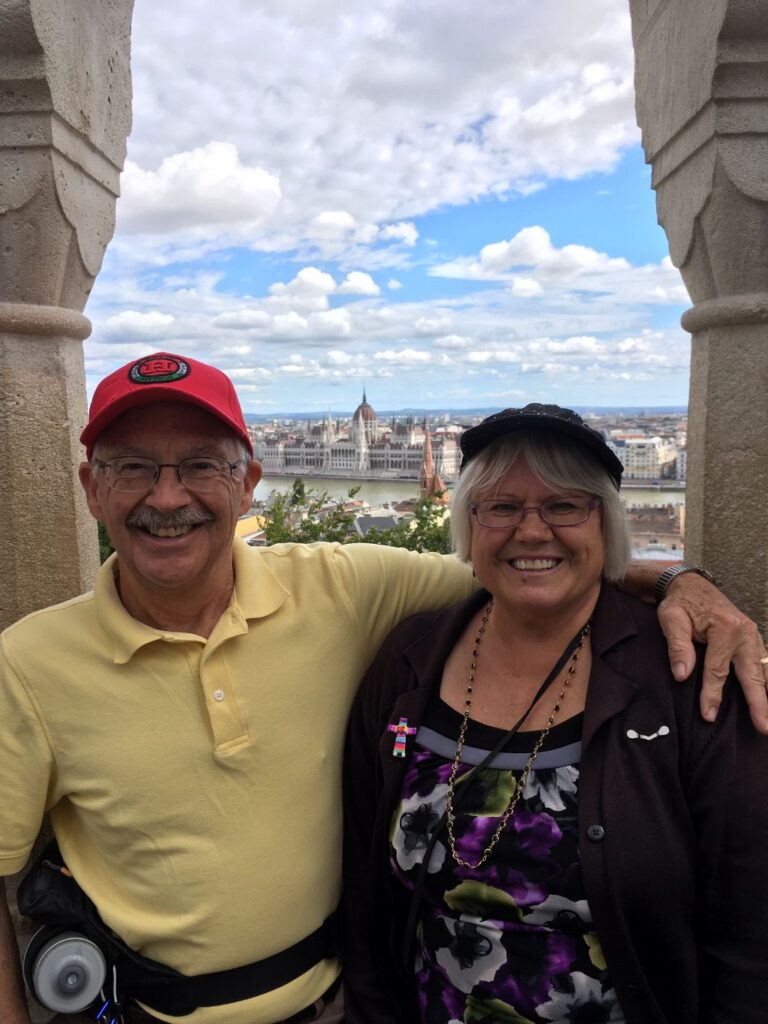 In Budapest, with Parliament building in the background.

We met at a Catholic Singles Club dance and married on Elvis Presley’s Birthday in 1977. We were fortunate to honeymoon in Hawaii and to have been back two additional times — on our 10th  anniversary and on our 25th anniversary along with our sons.

I know you’ve been active in the neighborhood association, Stanton, since we’ve written about some of your accomplishments in previous articles1…

Yes, I recall that time fondly as Area 6 Representative for six years as well as my two terms as President. It was then called  the Southern Gables Home Owners Association. I am proud of my part in the negotiations with the Agricultural Ditch Company and City of Lakewood to make possible the signed entry way into our neighborhood at  Jewell and Estes. Nowadays I serve as a Neighborhood Watch Block Captain on West Warren Drive.

Maria, what kind of work did you and Stanton do during your working years — you’re both retired, right?

Yes, we’re retired. I had multiple careers including as a nurse and a Pre-K Teacher for both Jeffco R1 and Concordia Lutheran, and I also served as a substitute Elementary school teacher. Stanton worked for Jefferson County Open Space as Park Operations Manager for 40 years.

Hobbies, activities, interests…?  Stanton: Our interests together include square dancing, listening to music, gardening, reading and glamping (glamorous camping)  with our Recreational Travel Trailer Club. We were elected Co-Presidents of the club in October of last year, and invest a lot of energy into that mode of travel. We really value our time with the great people in the club. We are both involved with Saint Jude Parish activities. Maria: I am a Communion minister at St. Jude, and I teach a class weekly as well as being a substitute Religious education teacher. I also do things for the church such as handling the Welcome Table and being in charge of the Rosary Makers Group. Stanton is finishing up his second term as the Grand Knight of the Knights of Columbus Council at St. Jude and also serves as an usher. Both of us are graduates of the 4-year Archdiocese of Denver’s Catholic Biblical School. We are very proud of having received the St. Jude Parishioner of the Year award: I was the 2011 recipient and Stanton in 2020. I enjoy working out and swimming at the gym. Stanton: I like playing golf, and belong to several leagues. I also greatly enjoy playing the piano. I’ve been taking lessons from our neighbor Leta Bontrager.2 She’s a terrific teacher. Maria and I both enjoy overseas travel and have been to many foreign countries including China, Hungary, Croatia, Italy, Greece, and Turkey. It was so cool being in Greece and on that last trip, in May 2019, I bought what I call a magic carpet in Ephesus, Turkey. Later this fall we’re looking forward to a trip to to New Zealand and Australia. Maria: I almost forgot, since we haven’t been able to do it for so long, but I like to play with the other women in the Neighborhood Bunco Club games. I hope we’ll get that going again.

In concluding our visit, I found out some little-known facts about this interesting couple. Maria immigrated to this country from Hungary as a 4-year-old during the Hungarian Revolution and can speak Hungarian. Stanton is a Denver Native and a member of the first Graduating class of John F. Kennedy High School. His Knights of Columbus Council partners with Food Bank of the Rockies in running a mobile food bank. He also is a member of a Minnesota Lake Superior Chippewa  Indian Tribe. He has entered several rodeo bull-riding events. He didn’t brag about how well he fared in the competition, but said that it was when he was old enough to know better, but too young to care.

One thought on “Meet Your Neighbors: Stanton & Maria La Breche”