A Brush With History

There is a group of men that I meet with on a regular basis, called the ROMEO Club. In case you’re not familiar with the term, it’s “Retired Old Men Eating Out.” The purpose of the group is often described as exchanging “war stories,” and that term means anything that happened in the past and can be embellished with a little polish for a more agreeable perspective. We have found that, through this process, the older we get the better we were. 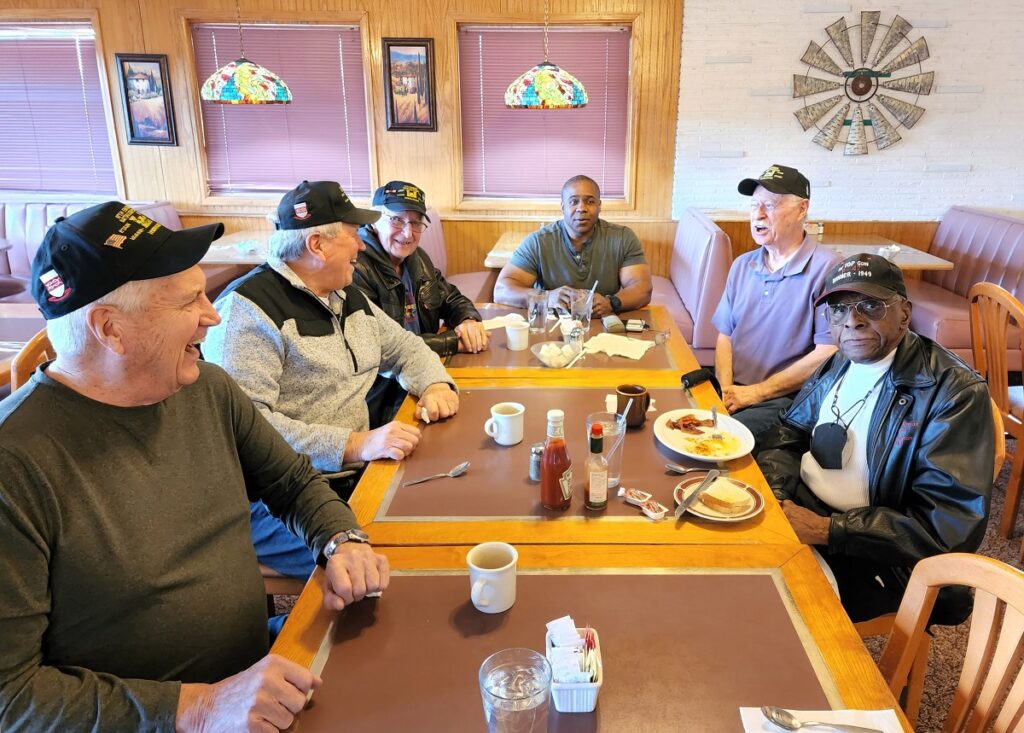 The other day over at the Valley Inn we had a brush with real history. We were joined by James Harvey III, one of the few remaining Tuskegee Airmen.  He’s the old guy in the photo, a Lakewood resident who at 98 years old is mentally sharp, surprisingly mobile (only used a cane), and has a sharp sense of humor. We ended up speaking a bit louder than usual for James’ sake and that had a surprising result: a couple firemen at a nearby table bought all our breakfasts.  They came over and we all chatted with one of them pulling up a chair next to me.

One of the young firefighters is at the head of the table in the photo above (the other one took the photo) and Lt Col Harvey is on the right. I am the one between them and was telling a joke. It’s a great group of guys.

On the other side of the table are “The Guys” from my old outfit: Bill Burrows, Ray Milhollin, and Jim Dillie obviously enjoying my brilliant joke!

Back to the fireman who picked up the tab and who we were conversing with.  He was deeply impressed to meet Mr. Harvey.  Nice guy who had, of all things, worked for Mr. Harvey’s daughter 24 years ago.  Talk about coincidences.

I was also deeply impressed with meeting Lt Col Harvey. Of course he is proud of his Tuskegee Airman affiliation, but justifiably he is even prouder of winning the Air Force’s very first “Top Gun” competition in 1949. That is a world-class accomplishment. You can read about James’ history in this article on Wikipedia: James H. Harvey. We didn’t talk about it at the ROMEO meeting, but I found out later that the Top Gun win was not officially recognized for many years. It has been recognized now, and having met the nation’s first “Top Gun” seems all the more special.

In his own words, on YouTube: The True and Untold Story of the First Top Gun Winner – Tuskegee Airman James H. Harvey III.

2 thoughts on “A Brush With History”