This is one in an occasional series about local history and old-time characters by our neighbor Ken Fischer. To see more of his stories, click on his name at the end of the article.

He was a small man in stature, but pretty large in all else.

He wore a tam and, but for the Roman collar, one would have made him for a leprechaun for he had a wry smile and lively eyes. The wry smile was not unfamiliar. I had seen such when I would identify a new device, scheme or process that seemed too good to be true (and usually was). My beat partner, Jim Miller, would say nothing but issue that smile with the implicit assumption that this was another shell game. Some days later he would wryly ask “how’s that working out for you?” It wasn’t. 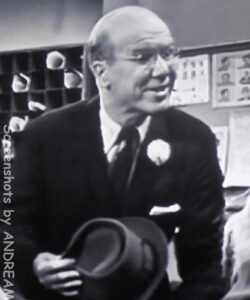 The Padre looked a lot like the actor John Fiedler.

He was a Theatine Priest. An Italian order dedicated to education of less privileged youth and characterized by gentleness, patience and humility. Boy did St. Cajetan, the founder, have his man here in James Prohens.

I met him through a great (not just good) friend, Vince Coyle. Vince was a man for all seasons who lived his faith daily, not just on Sundays. He was such a commendable character that he was the victim of multiple practical jokes throughout our lives. Vince and JoAnn had been married by the good Fr. Prohens in Colorado Springs in the fifties.

During a visit in Denver, Vince took me along to meet this diminutive pillar of the faith for lunch. I was impressed. He spoke sparingly but said a lot. He was funny and also enjoyed ribbing Vince.

At one such later lunch, I asked Father his take on the community angst fostered by a younger firebrand priest and the La Raza movement, known to the police for bombings in Denver. Without hesitation, Father quietly retorted: they have spirit and dedication but they have never heard the bullets pass overhead.

I did not immediately digest or understand his meaning. Vince clarified. James Prohens was a seminary student in Spain during the bloody Spanish Civil War and had often faced life and death encounters. He knew the territory and walked the walk. He was beloved among his parishioners at St. Cajetan Church, the first Hispanic parish in Denver. I asked him how many parishioners there were. He asked back, “Officially or unofficially?” Enough said.

My wife and I had taken our Pre-Cana (marriage preparation) instruction through him at the parish and were honored to have him at our home for the baptism of our son several years later. He was smooth and easy to talk to. Vince related that he also had skill in negotiation as well as legal issues. This became important when his traditional parish site in Auraria was to be reconstituted into Metro State University property. A new venue for St. Cajetan’s had to be found. An appropriate property was located and plans initiated until the City of Denver found multiple problems and denied the request. 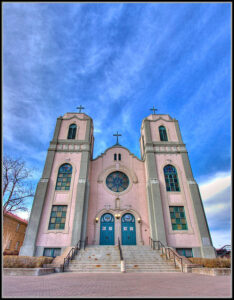 Fr. Prohens politely researched, developed and presented a better plan with all the bases covered. He recruited a phalanx of high rollers on his team to run interference for him if necessary. It was not needed, and on the strength of his plan the parish was built on west Alameda to serve a thriving population of mostly Hispanic working-class faithful. Part of the deal was to have the old church building stay and become a multi-purpose building, hosting lectures, concerts, recitals, and other community events as part of the Auraria campus.

Fr. Prohens however was an addict…. His addiction was well known and actually supported by his friends and parishioners. He loved Village Inn pie. After executive sessions with church leaders, it was off to Lakewood and Village Inn.

We had become pretty good friends, fighting the battle to make life better for people, but from different directions. We would often see father and his flock at the VI at ten o’clock or after when we would get our last coffee before ending our shift at 0100. One night the spirit of mischief overtook me and in a page out of the Vince Coyle practical joke manual, I approached father’s table and sternly advised him that this time he would have to pay his bill or receive no future service. The management was willing to overlook this once in a while but…. Fr. Prohens took up the drama and promised to do better in future.

This performance being witnessed by ten or so of his parishioners was surprising with most of them instantly stepping up to cover what appeared to be bad judgement by a PRIEST! We cut it short, laughed and embraced and the heart rates of those present went back into acceptable range.

I am not religious but do believe in God. The big guy in the sky had a skilled soldier in James Prohens. He would sometimes ask for my help which I would gladly give. Mostly it was information regarding a bad domestic situation, family members making bad choices based on bad information or a kid in trouble. He had an abiding principle that there were no ”bad” people, just poor judgement based on anger, greed, substance abuse or depression. I was advised that he could usually calm most storms and it put me to mind of a verse from a Kingston trio song: the reverend Mr. Black. “He stood like a rock, a man among men and he let that lumberjack hit him again, and then with a voice as quiet as could be, he cut him down like a big oak tree…”

The years passed. Life was busy and packed with experience and commitment. I got a call from Vince advising that father had been diagnosed with inoperable abdominal cancer. He was in no pain and at the parish, but unable to work in his life passion as extensively as before. One afternoon I called him and later met with him at the rectory. We shared some great Village Inn pie.

I had seen a lot of death and encountered people on the verge. I had never seen a man facing death with such grace and comfort.

He was going home. His race was run and he had finished well.

We shared a sentiment common to our roles in life: A man only gets so many days in his chosen vocation; make the most of them. Try to give back more than you take from life. He had.

His funeral was immense. People were standing for blocks around.

This quiet, humble man would have been pleased.