It was with great sadness that we recently learned of the death of Dick Lamm, former Governor of Colorado. Our Southern Gables neighbor Ken Fischer, a retired Lakewood police officer, tells of an encounter with the Governor during his days on the force, revealing some little-appreciated aspects of the man’s character. Following this story you can find more of Ken’s stories by clicking on his name at the end of the article.

I was privileged to meet the Governor almost fifty years ago and spend some time chatting with him. My memory of the man was quite positive. He was affable, legitimately interested, inquisitive and GENUINE. Other similar contacts with persons regarding themselves as important were often logged as time wasted in narcissistic narratives. The occasion was a flight to San Francisco. My partner and I were dispatched to extradite several fugitives from the city where so many people had sung about leaving their hearts. The governor was attending a meeting at U. C. Berkeley where he held a regents position.

While waiting to board the minimally booked evening flight, I noticed the Governor seated in the common area, doing some paperwork. I mentioned this to my partner, who rejected the fact that this was the governor, flying unattended by security. I thought that was somewhat odd as well, but this was the seventies. 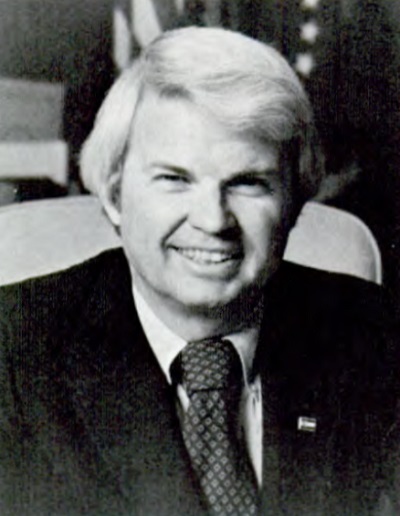 By Office of the Governor of Colorado – Annual report of the Missouri River Basin Commission (1981), Public Domain

Onboard we were seated in the rear row (policy for flying armed). Once aloft, I took the opportunity to introduce myself. I queried the governor regarding the security aspect. He smoothly advised that the state patrol accompanied him to the gate and California troopers provided security in the bay area. He impressively noted that Colorado would not need to spend any additional money in his protection.

I advised that we would render him any assistance he may need. He smiled and asked if I wanted to join him for a beverage. I would, but non-alcoholic by policy.

We chatted for some time during the middle of a smooth flight and I was taken by his legitimate interest in my department, background and opinions. It was clear that we would not have the same attitudes on most subjects but that was secondary to a great conversation. Dick Lamm reminded me of several teachers and professors. He had an easy, direct, understandable and humorous manner. He was quite affable and very up to date on all the issues of the day. I could not resist asking, but not expecting an answer, regarding his dilemma with his Lieutenant Governor. This footnote of Colorado political history had to be among the strangest since the notorious madam Mattie Silks operated tunnels under downtown Denver to afford passage to less than reputable politicians of the era.

Governor Lamm found it necessary to freeze the budget of his second in command due to ill-advised overspending in the Lt. Governor’s office. This drawing of the purse strings continued for a good proportion of the last year in office for both. Dick Lamm had no problem with identifying a problem and swiftly solving it. A straight shooter in my book.

Of course, the Governor wryly smiled and moved on to other areas of interest.

One of the regrets of my life was in not taking him up on his offer to host dinner for my partner and me in Sausalito, where he was staying. I did not want to impose, but in retrospect, it would have been a very interesting experience.

Sidenote: Even though I regretted passing on dinner with the Governor, my partner and I had a good time in the City by the Bay. We had arranged an extra day to visit the wharf and cable cars, neither of which my partner had experienced. When in San Francisco, it is incumbent on a visitor to ride the cable car, and get a crab cup on the wharf as well as an Irish coffee at the Buena Vista Tavern. We did. The cable car ride was entertaining, but so were the diverse people along the route and in our car. My partner did not care for the ride. The Buena Vista was outstanding as always, but my partner was aghast at the cost of pie and coffee. The crab cups were a hit and he ate four of them. But back to the Governor…

Dick Lamm had a notable passion for Colorado and history. He greatly reminded me of one of my college professors who taught civil war history with such a passion that he often became emotional when recreating battles. His classes were always full and had few absences. I made it a point to take this class after graduating as it was so enthralling.

History? Here’s a side story on Dick Lamm, and a good one! The Governor was a classmate of Steven Ambrose, the historian, when both were underclassmen at The University of Wisconsin. Dick Lamm encouraged Steven Ambrose to take a history course which set the hook in the renowned author to forgo the medical field and explore history. In fact, Steven Ambrose invited Dick Lamm to accompany him when he retraced the route that Lewis and Clark followed to the Pacific! 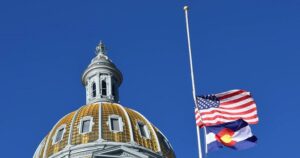 How about them apples.

Rest in peace, Dick Lamm. You served well and were a credit to your state and country.

One thought on “Dick Lamm”