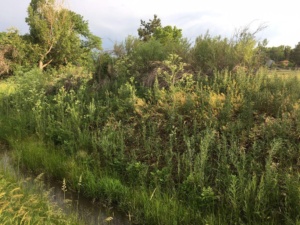 What a mess! Weeds. We told you last year about our weed whack job out by the Southern Gables neighborhood entrance sign, “The Rock.” The Neighborhood Association hired a crew on its own dime (What do the Dues Do?) to clear out some 50 years’ worth of weeds on that vacant lot. Since the property belongs to the Agricultural Ditch Company and they didn’t agree with the need to clean it up, we decided to “just do it!” and were proud of the results. 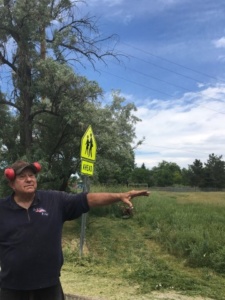 Still, that was just the area adjacent to our sign, not the whole ditch. The Ag Ditch runs through our neighborhood from Jewell Avenue & Estes south past the school to Woodard, then all the way down toward Morrison Road and out  to points east — it’s a massive job to maintain it. That was just too much for us to tackle. Ken Fisher, bless him, borrowed a Bushmaster and hacked at part of it next to the schoolyard one Saturday and made a dent. But getting the whole long ditch’s weeds cleaned up was a problem that Doug Whitten had been trying to get done for years. Years! There were little bureaucratic evasions and dodges that kept delaying action, not so much as to whose responsibility it was but more as to the compliance and enforcement authority. After all, “The Ag Ditch” was here before Lakewood was Lakewood, giving vague overtones of senior rights over city code enforcement. There were other excuses too, such as the difficulty of getting their large mowing machines into that confined space. Frank Bontrager, who headed up the earlier weed job, said he and Doug felt like they were pushing against a brick wall.

The weeds were at least five feet high and there were volunteer trees growing as well. Longtime residents who live next to the ditch say some of the weeds hadn’t been cut ever since they had been there, over 40 years.  This has been an eyesore with weed pollen and seeds blowing all over our neighborhood. It was a nesting area for varmints and human vagrancy, and general safety to the area has been at risk. After all the ping-pong of letters to city Code Enforcement and the Ditch Company management, Doug found a solution. The solution was our City Council Ward 5 Rep, Councilwoman Dana Gutwein. Doug met with Dana. The weeds got cut. 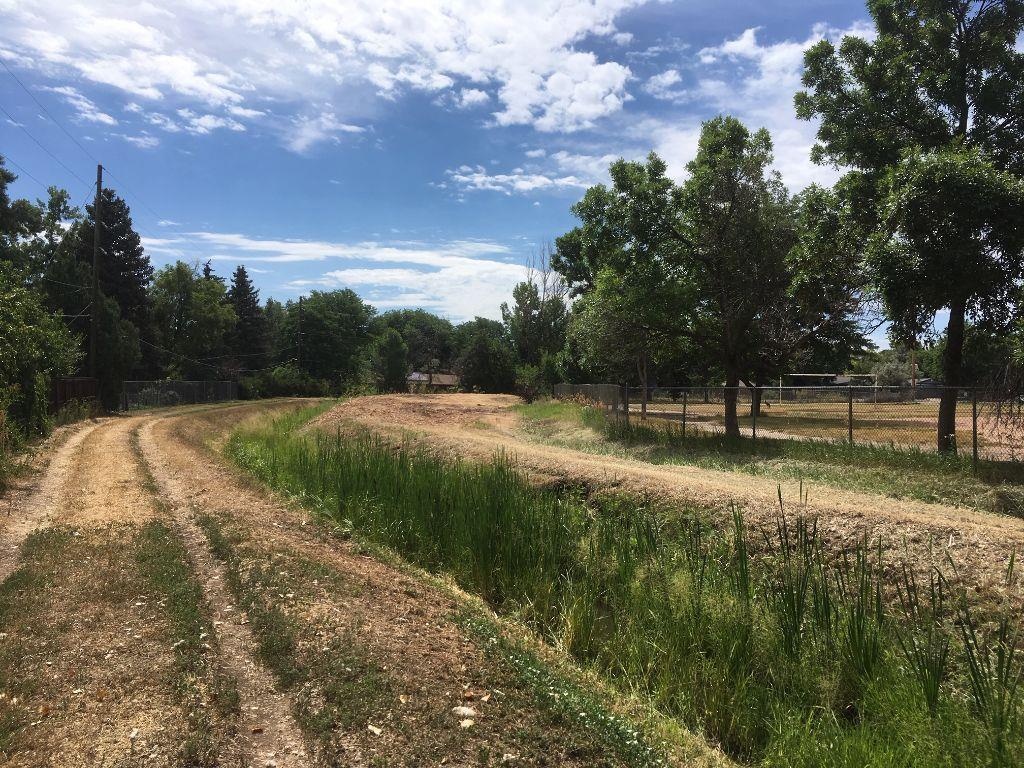 The Ag Ditch maintenance crew finally started mowing with their big blue tractor/mower and extended mower attachment. The results were amazing! All of the tall brush and weeds next to Green Gables Elementary School and elsewhere along the ditch have been mowed. We can thank Doug, Frank, and Ken for their persistence and a big shout-out to Dana Gutwein for putting the effort over the top. And to the Agricultural Ditch Company for doing the work, despite the difficulty of getting their machines in there, and the workers who did the job, a big round of thanks from a neighborhood at last relieved of a persistent nuisance.

The dues money we collect doesn’t cover all of that, of course; we do a fundraiser with Chipotle specifically for Green Gables Elementary, and we have a good number of neighborhood business supporters. And not all our money goes to community organizations. For example our annual Leaf Raking and Leaf Gathering, with volunteers raking leaves for neighbors who can’t do it on their own, costs us $650 for the two large dumpsters that take the collected leaves for composting. Then in August (on Friday August 23 this year) we have Neighborhood Night Out where we pay for a live DJ and provide free hot dogs and drinks, and draw for prizes which amounted last year to over $1,000 in value. Local business supporters set up booths with games and giveaways, and it’s an old-fashioned good time with friends and neighbors.

There are other things too, the kind that it’s easy to take for granted. The Association organizes and advertises an annual neighborhood garage sale, arranges monthly Southern Gables neighborhood luncheons (with a raffle for $10) and evening get-togethers, and maintains the neighborhood entrance sign (“The Rock“) at Jewell & Estes. We publish and distribute a newsletter too, twice a year (Hey, do you like to write or edit?) and then there’s the popular Southern Gables Neighborhood Tote Bags with goodies from our local business supporters. Discounts and free stuff! National Junior Honor Society students at Carmody Middle School pitched in to assemble the contents for the Tote Bags, earning $450 for their club programs in the process.

We hope you’ll see the benefit of supporting the Southern Gables Neighborhood Association.

The Southern Gables Neighborhood Association sponsors monthly luncheons for neighbors to get together and enjoy each other’s company. Carol Lally organizes them, and they are (almost) always on the first Thursday of the month. Friendships are formed, new people are welcomed, and it’s just one of the nice things about living in Southern Gables. Our January luncheon was at Nicolo’s Chicago Style Pizza. Maria La Breche handed out hard copy photos of the last time the group ate there, back in August. Everyone agreed that no one looked any older. The Neighborhood Association always holds a free raffle at the monthly luncheons, 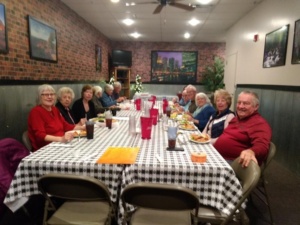 with the prize being a free lunch. Tom Cummins had the lucky ticket, but he has won so many that he declined the prize and then it went to Janet Zietz.

Linda Reyd missed being in the picture, but she brought a loaf of homemade bread (apple-craisin-pecan-banana bread!) for which another drawing was held and won by Maria La Breche.

The next luncheon is scheduled at the Zest Restaurant on February 7 at 11:30. You can find that and other monthly events of local interest on our Events page, here. And by the way, if you have suggestions to add to our Southern Gables Events page, use the “Contact Us” tab and let us know!

Click here to get new posts (News) by Email